This audio was mentioned in the 1990 announcement of master tapes to be delivered in the audio re-mastering project as "Interviews Rajneeshpuram unpublished #02". A "#1" and "#3" also were announced. These three were not delivered though.

This is an audio-recording of a collective meeting in Rajneesh Mandir, Rajneeshpuram, Oregon, USA, on Oct 29, 1985.
At this meeting, the chief of the Press Office Ma Prem Isabel, and Ma Prem Sunshine report about Ma Prem Hasya giving an interview with CBS Nightwatch. There are also references to telephone-communication with Ma Prem Hasya and a Ma Prem Kendra **.

Ma Prem Isabel: Hasya held the first press conference today (...) we got the transcript of the press conference, the questions, and Sunshine is gonna read at least the highlights of it, so we all can hear what she had to say. I spoke to her about an hour ago and she got for the first time to see Bhagwan today, she spent about 5 minutes with him. I didn't know we would have a chance to see him, but she described how he was doing (...)
Ma Prem Sunshine: So what I have, Hasya and Peter Shay, who is the immigration lawyer, held a press conference. And Mary Catherine from the Rajneesh Times understand that it's in Charlotte and she is covering the story for us and we had a tape played for us on the telephone, we had it transcribed tonight, the tape was barely audible, so bear with me, I'm gonna try to give you as much of it as we have but there is gonna be some confusion in some of the sentences. It's a question and answer situation. "Would you be asking to have him leave here and go back to Oregon?" And then it's Hasya that's gonna be answering all these question. "I'm pleading, please get him out of jail (...)" 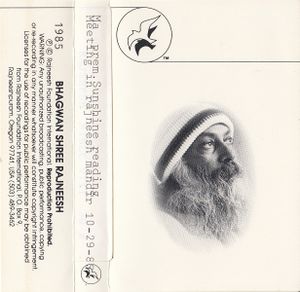 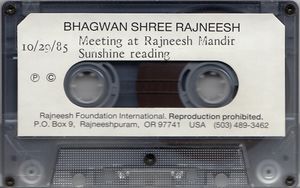 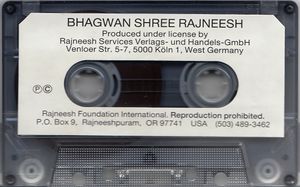