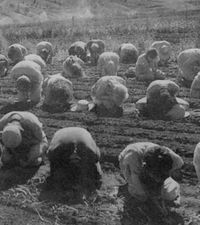 Gachchhamis at Surdas, the truck farm, part of the larger image mentioned below

Gachchhamis were a short, formal collective ritual chanting and bowing down of groups of sannyasins at specified times. In the context with which they are most strongly associated, daily life at the ranch, the specified times were at work ("worship") sites at the beginning and ending of each work day. They were also done in the large assemblies at ranch celebrations and in the satsangs toward the end of Poona One.

The basic practice was this: When led by someone, the leader would chant the first three words, then the rest of the assembled would echo that, and so on with the next three and the last three. When done in small groups, all would just do it once, without a leader, bowing down to the ground with each line.

There are over a hundred examples to listen to here in the wiki; they can be found in any ranch satsang or darshan album or the May-July 1981 satsangs in Pune. Their time on the sannyas planet was from late Poona One through the ranch days until early Oct 1985, some two or three weeks after Sheela left. In Pune and in the large gatherings at the ranch the chanting was led by Ma Yoga Taru.

Many current and former sannyasins associate them with the atmosphere of regimentation at the ranch, though some remember them with fondness as heart-opening and ego-letting-go. (See the quote below from Osho regarding their use and the relationship with the practitioner's attitude.) Prior to their introduction in Pune, Osho spoke on them many times, sharing anecdotes and insight. The earliest mention known at this point is from In Search of the Miraculous, Vol 2, a translation of Jin Khoja Tin Paiyan, in a talk given in 1970.

Where did they come from? They have a long and widespread history in Buddhist practice, the words themselves still being in Buddha's language Pali. There are two significant differences between the usual Buddhist forms found on the net and the sannyasin form above: first, the order of the second and third gachchhamis is switched; and second, the usual meaning given in Buddhism is "I take refuge in ...", not "I go to the feet of ..." In Osho's talks about them, he does refer frequently to them as "shelters", but "I go to the feet of ..." is what came through in the ranch.

Sw Satrakshita has an excellent article on his site about the gachchhamis (which also links to two other articles and a two-page photo spread in a 1984 German Rajneesh Times, a part of which is the image at top right). His article includes an example, reproduced here, of the highly selective editing of Osho's words (and guidance) of that era which was used to create and shape the atmosphere of regimentation mentioned above. That highly selective editing appeared in Sheela's classic condensation and attempted codification of Osho, Rajneeshism. Satrakshita also has a picture of a group of sannyasins gathered around an arrangement of 5,000 copies of this "little red book", about to burn them along with Sheela's robes. This pic is reproduced on the wiki's page on this book.

The quote from Rajneeshism:

Your idea of God is an escape from living. You are afraid of life, of love, you are afraid of death. You are afraid of ten thousand things, and they are there and you don't want to see them eye-to-eye. You don't want to know what exactly the case is. How to avoid it? You become engaged somewhere else. You create a great desire in your mind, a distant desire - somewhere in the future it will be fulfilled - and you become obsessed with it. Then you worship God, and you are worshipping a false God.
All worship is false, because real worship consists of living, not of worship. Real worship consists of small things. Not that you do rituals - all rituals are just strategies to create a belief that you are doing something special, something sacred. You are simply being stupid, nothing else. You can decorate your stupidity - you can chant Vedas and you can read Bibles and you can make great rituals in the churches and temples and you can sit around a fire and chant great songs - but you are simply being stupid; this is not being religious at all.
But a religious man lives day-to-day, moment-to-moment. Cleaning the floor, and there is worship. Preparing food for the husband, and there is worship. Taking a bath, and there is worship. Worship is a quality - it has nothing to do with the act itself, it is the attitude that you bring to the act. If you love the man and you are preparing food for him it is worship, because the man is divine.
Love makes everyone divine, love reveals the divinity. Then it is not just your husband, it is God in the form of your husband. Or it is in your wife in the form of a woman - but it is God, ultimately God and always God. A child, your child: God has come in a certain form to you.
Recognize! See! And there is worship. You may be just playing with your child and it is worship - far more significant than what you do in the temples; the worship in the temples is just plastic.

BHAGWAN,
PLEASE SPEAK ABOUT THE SIGNIFICANCE OF THE GACHCHHAMIS NOW THAT WE HAVE DROPPED RAJNEESHISM.

Gachchhamis have nothing to do with religion. Gachchhamis have something to do with your determination. These are the gachchhamis. It is not a prayer.
"I go to the feet of the awakened one, to his commune, to his truth."
This is simply a declaration on your part. The awakened one does not indicate any individual; it simply means all the awakened ones of the past, of the present, of the future. It simply means the quality of awakening . And you are making yourself remember, that "I am dedicated to only one thing", that "I have to become awakened ... to his commune ... to his truth."
No particular name is mentioned. All the communes of all the awakened ones are implicated in it. Of course the truth is the same; whoever has awakened has found the same truth.
It is simply a remembrance of your own decision. It is going to remain. And it is individual, it has nothing to do with any collectivity. And it is profoundly beautiful.
It serves another purpose also. "I go to the feet of the awakened one," means you are at least for a moment putting your ego aside, to the commune, to the truth. The only way to reach awakening, and the truth it reveals -- all that is needed is to drop the ego completely. But even to put it aside for a moment will give you a tremendous experience, a glimpse. Just a small breeze of awakening will move through your being. It has nothing to do with religion.