Kailash was an experimental communal farm set in motion by Osho in early 1974, after the last meditation camp in Mt Abu. A group of thirty mostly new Western sannyasins were sent to "build" it with virtually no instructions and no relevant skills or life experience. This all was to happen on land in North-east Maharashtra owned by Ma Anandmayee and her husband Rekhchand Parakh. 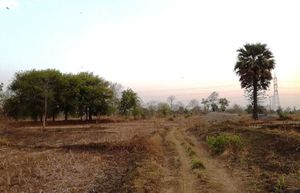 Path to Kailash 45 years later, only the pylons and cables are new 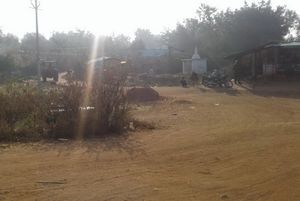 Saoli, also same as it ever was

The place was already a "working farm" but very rudimentary, having only one small house and a barn. It was a four-mile walk from the nearest dusty village, Saoli, which was a bumpy three-hour bus ride from Chandrapur, where Anandmayee and Parakh lived.

The main account we have of it is from Veena's book, Glimpses of My Master, a lengthy excerpt from which can be found at Osho News. [Spoiler alert: In the end, the project was abandoned, as the numbers of participants dwindled and Osho's move out of Mumbai to Pune obviated any need for a "new commune", at least for a while. But it did have a long good run.] Below a few snippets from that article.

Osho had sent thirty of us into the wilds of central India with strict instructions to ‘build the new commune’. I am sure there were two questions in the minds of many – ‘How?’ and ‘With what?’

This audacious experiment is a little-known episode in the history of sannyas. It was the first ‘encounter group’ – on many levels, on a large scale and lasting many months!

[... Osho] always said that the spiritual path was not for the faint-hearted. It required courage, integrity, perseverance and physical and emotional endurance. Well, Kailash was the perfect initiation into the attributes required!
[...]
Ma [(Anandmayee)] had gone on ahead and we found that our meal for the night was to be ‘sooji’ – a kind of porridge. She then indicated that we could perhaps sleep in the attic of the rough farmhouse which comprised her room, a storeroom of farm implements and another room which was apparently destined to be our kitchen. I was the first to go upstairs and at the sight of the dirty cobweb-strewn place decided I would not stay there for an instant. Having come overland myself, I was quite happy to sleep outdoors and so the crowd was divided into those who wanted to sleep with a roof over their heads and those who preferred the stars. The former group set about trying to get the attic clean and banish the cobwebs and their residents while the remaining lot swept the veranda and lay down sleeping bags to stake claims for a sleeping space. We ate the lumps of sooji off washed banana leaves and drank a few sips of suspect water which Ma assured us was safe to drink.

Toilets had hitherto been convenient bushes but some kind of sanitary arrangement was obviously of prime importance. The consensus was, however, to leave everything till the morning because we were dead tired and maybe sleep could obliviate fears of the daunting task ahead and mask the hunger and thirst.

Young we were, and sleep came easily and the dawn brought a beautiful day – and excitement at the challenge ahead superseded the fears of the previous evening. After more sooji for breakfast, the first of many meetings was held. Osho had put a South African, Veetrag, in charge but even at the first meeting his authority was challenged by two other men: Teertha (now Paul Lowe) and Shiva (now Hugh Milne). Teertha’s nose was out of joint as he was the GREAT group leader and was obviously, to him, the rightful leader – which is why, no doubt, Osho chose Veetrag. And Shiva … well, this was Kailash, wasn’t it? Of course he should be lord of it all!! We secretly dubbed them ‘the triumvirate’.

The foremost issues were food, water, shelter and toilets. There was no obvious source of food and the dismal lunch was a katori (a very small metal bowl) of soup made from clover picked from the field (with Ma extolling its health-giving properties) and a couple of chapattis made by a local woman. This could not continue!

Ma made it clear she was not going to support us so we each put 100 rupees into a kitty and a farmhand was dispatched to Saoli to buy staples such as rice, dal, spices, salt, tea, sugar and cooking oil. We could buy flour from Ma as the barn was a storehouse for wheat and corn grown on the farm – complete with a small milling machine to grind the wheat, coarsely for the sooji for breakfast, and finely for the flour for chapattis. This was all horrendously basic but there were so many other issues to decide quickly that it would have to do for a day or two.

Then water… Ma insisted that the river water, if collected in mid-stream flow, was amoeba – free and could be safely drunk after having undergone her patented cleansing method: she had a magic crystal which she stirred round and round in the water with an unwashed hand making ‘tch tch tch’ noises which supposedly chased all the bad things away! Two days later many had diarrhoea so the crystal was abandoned and we boiled the water from then on, although boiling enough daily drinking water for thirty people was quite a task.

Shelter…. While the stargazers had had a good night’s sleep – although, as a South African myself, I was more attuned to the possibilities of scorpions and snakes than were my city fellow sleepers – the people in the attic had had to put up with, as Sudha put it, the rats playing football games from one end of the ceiling rafters to the other. The possibilities of more intimate associations with the rats made everyone anxious to find an alternate sleeping solution.

Enter Borjoram, the farmhand-in-charge – one of the best features of our time in Kailash. He was a star of the first order. A gem of a man. Without him I doubt if we would have survived the experiment, especially those initial few weeks. Firstly, he had a great sense of humour and whenever things got too much he would, without fail, make us laugh at the huge absurdity of everything. Secondly, he understood that when he spoke we didn’t understand him. This was a hard concept for the local Indians to comprehend. Having no knowledge of anything beyond their small village, they found it difficult to grasp the concept that we spoke a language other than their own, Marathi, and maybe Hindi. Borjoram quickly learnt to be patient with communication attempts. Thirdly, he spoke Hindi as well as Marathi. This was a big help as I spoke a smattering of Hindi having learned the language when I had lived in Benaras, so I was the initial ‘translator’ until others learned a few basic terms. Borjoram could also read and because a teacher in Saoli, the only person who spoke English in the whole area, had given us a dictionary of English/Hindi/Marathi words, Borjoram was able to read and show us the words he wanted to use. So we set about learning them in double-quick time. And fourthly, he was brilliantly practical; when the issue of a shelter came up, he was able to anticipate our needs and provide materials and practical construction know-how to create a structure.