Difference between revisions of "Letter written on 1 Mar 1961 am" 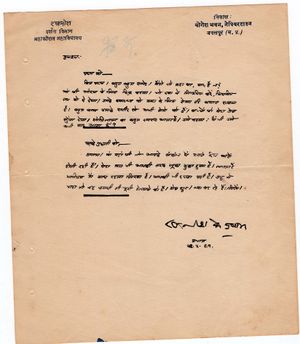 This is one of hundreds of letters Osho wrote to Ma Anandmayee, then known as Madan Kunwar Parekh. It was written sometime in the end of February 1961 -- see discussion for a consideration of dates -- on his personal letterhead stationery of the day: The top left corner reads: Rajneesh / Darshan Vibhag (Philosophy Dept) / Mahakoshal Mahavidhalaya (Mahakoshal University). The top right reads: Nivas (Home) / Yogesh Bhavan, Napiertown / Jabalpur (M.P.). Many of his letters on this letterhead have had the number 115 added in by hand before "Yogesh Bhavan" to complete his address, but not this one.

Like the previous letter, written on Jan 4 1961, this letter does not have Osho's usual salutation, "प्रिय मां", Priya Maan, Dear Mom. It purports to be a PS to a possibly missing other letter; see discussion also about that. Its layout is headed with the word "पुनश्च", punashch, "Postscript", followed by two sections, each addressed to unreadable names.

Finally, the letter lacks most of the marks found on most earlier letters, except that it does have a small group of pale blue, non-circled marks in the top middle part of the letter whose meaning and import is not clear. These marks do not resemble marks found previously, but they are similar to marks on the next letter, written only to Anandmayee, on Feb 28, link below.

We are awaiting a transcription and translation.

See also the Letter written on 28 Feb 1961 xm, which may be connected with this letter.

And see also Letters to Anandmayee