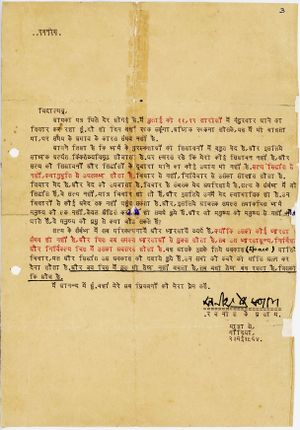 This letter was typed on plain paper while traveling from Gondia in the northeastern tip of Maharashtra, on 23rd May 1964. There is a typed "Rajneesh" on top in place of letterhead. It is signed with "Rajneesh ke pranaam" and mentions an upcoming event in Nandurbar (also upstate MH) on 11 and 12 July. It is not known to have been previously published.

The salutation is "Chidatman", literally "conscious soul", which Osho uses on occasion. The same salutation is found in another typed letter from May 1964 and may pop up in others as well. The recipient /addressee is Manubhai Desai. Two other letters to him can be found at Letter written on 12 Jan 1963 am and Letter written on 26 May 1963 (Manubhai), both handwritten.

We are awaiting a transcription and translation.

See also
Letters to Manubhai Desai ~ 03 - The event of this letter.