Difference between revisions of "Letters to Anandmayee" 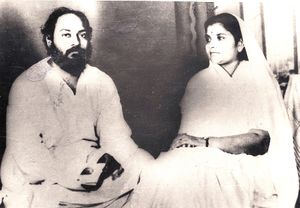 Osho wrote hundreds of letters to Ma Anandmayee, whom he recognised as his past-life mother, starting in 1960. Most were written in the early 60s. 120 of those letters were compiled into a book, Kranti Beej (क्रांति बीज), or "Seeds of Revolution", later translated as Seeds of Revolutionary Thought. Kranti Beej was one of his most influential early books.

Many letters were also published in Bhavna Ke Bhojpatron Par Osho (भावना के भोजपत्रों पर ओशो). The degree of overlap between these two books is unknown, as is Bhavna's First Edition history.

The wiki has been fortunate to obtain 221 high-quality images of Osho's letters to her. Links to each are or will be below, with notes, where applicable, if published. Currently under construction, stay tuned.

As there is a rough correlation between file number order and chronological order among the dated letters, there is a reasonable chance that these undated letters can be approximately dated simply by putting them time-wise between letters they are between file-wise. This is far from guaranteed of course, but as a potential aid to rough placement, the date ranges as suggested by this method are included below. ** = special, see notes below the list. And some will / have become located in time by getting paired with a dated "other half" and text matched to a published letter.