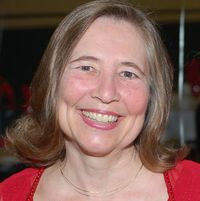 Anand Gayatri was born in May 1946 in Philadelphia. PA, USA. She had three degrees in economics: a BA from Oberlin College, an MA from the University of Wisconsin and an MPhil from Oxford University.

Shorly after her studies she moved to Geneva, where she worked as an Economist at the United Nations. During that time she came to hear from Osho, took sannyas by post and received the mala from Deeksha who was running Osho’s Meditation Centre in Onex, near Geneva. She visited Pune mostly on her holidays, but she was actively involved in bringing her colleagues to do Dynamic Meditation every morning or convince them to participate in the weekly Nadabrahma Meditation at the centre or to an audio discourse evening which she held in her flat. (When Osho had asked her which meditations she was doing she mentioned one she had learned from a Buddhist master. Shortly after this darshan Nadabrahma was introduced in Pune together with a music track.)

When the Osho Meditation Centre in Onex closed in late 1977 she ran the centre from her home for the following three and a half years. In 1981 she gave up her job and closed down her flat to permanently live close to Osho only to discover that she had arrived the day before Osho left for the USA! However, once the Ranch began to be populated, she wasted no time and moved there in spring 1982. She mainly worked in Hakim Sanai and Diogenes Computer Services. She remembers that “it was deeply fulfilling for me to be working among people who all had the same heart connection.”

After Rajneeshpuram closed Gayatri moved to Sacramento, CA where in 1987 she found fulfilling work (statistical research and business applications) as a Senior Economist in an energy consultant firm (JBS Energy), concentrating mainly on utility issues. She said to Bhagawati when she visited Bali in 2009, “Awareness helps me so much in my work – to stay centered in stressful times, and to have the courage to follow my intuition and creativity.” She was very proud when she had purchased the house of her dreams, with shady maple trees in the garden. She retired from her job about two years ago.

In 1998 she discovered Trillium Awakening (aka Waking Down) and became a teacher and mentor, making the work “sound relevant, down-to-earth, and accessible” (so typical Gayatri). She was also involved in the work of Ken Wilber and became an Interning Teacher of Waking Down in Mutuality.

In August 2014 she was diagnosed with cancer (small cell carcinoma) which had cleared last spring. Although she was in remission, the cancer came back much stronger than before, as sometimes happens.