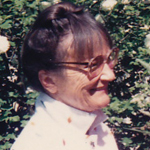 Nirgun visited this planet from 1923 to 2011. She landed as the youngest child of seven in a pioneer family in the Xtreme wilderness of Kingcome Inlet, on the west coast of Canada, four hours by boat from the nearest tiny store. Her long and unlikely path to Osho 51 years later led through university, marriage, three sons, a career in social work, a second career in government, turning on and dropping out, Gurdjieff, finally arriving in Pune for her new life in 1974.

Osho gave her the name Ma Anand Nirgun and told her, "Anand means bliss, but forget the Anand, just remember the Nirgun, the formless". And so, after an already full lifetime of having been there and done that, in new her life as a sannyasin, she did it all again, only different. One of her sons came to take sannyas too, and Osho set up her and him and his girlfriend to all live together in Jesus House, to "flow together in the same room". She did Encounter and a thousand other things.

When the Ranch came along, she gave everything she had to help it get built. She was Osho's cook. When Osho left the Ranch and got arrested three thousand miles away, she flew there to hold a vigil outside the courtroom. Eventually, it was time to write a book about it all, and so she did: Hellbent for Enlightenment