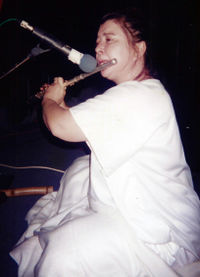 Ma Anand Yashu (9 October 1956 - 3 December 2007) was known for her big heart, for the divine sound of her flute, for her generosity, for her authenticity, for her open friendliness to all, for her spanish omelette, for her totality, for her devotion to Our Beloved Master, and was known as Osho's flute player, a true Zorba the Buddha.

Her mother Geeta met Osho in Bombay in the early Seventies and introduced his meditations to her and many others in the first Spanish Osho Meditation Center, Neel Akash, in Barcelona. She took sannyas in December 1977.

In 1978, the pull of the Master drew her to Pune. With baby daughter Kavyo in her arms ,Yashu's introduction to the commune came by playing her flute in Osho's parents' house in spontaneous kirtans. When Osho's Energy Darshan started in Chuang Tzu Auditorium, Yashu was invited to play her flute. During the day she worked in Osho's garden in Lao Tzu.

In 1981, Satsang began happening in Buddha Hall, and Yashu played with many musicians in this meditation with music, at first conducted by Osho from His room. At one point, she became really sick and was admitted into hospital. Osho sent her a message that it was not her time yet to leave the body, and when she recovered, she took her place as Osho's co-ordinator for the music for Satsang when He returned to Buddha Hall. Osho wanted only her flute for that first morning Satsang, near His podium. Yashu had only Yoga Krishna accompany her, on the tanpura, for this beautiful gift. At the end of May, Yashu flew with a few other musicians to the USA, to greet Osho on His arrival at the new commune.

In 1995, in Europe Yashu joined Harida and Nartan, touring and recording, under their new label, Nazca Music. Together they recorded 3 albums, In Silence, Oasis and Shanti Shanti. She also recorded with other musicians for Nazca. In the Middle East, tracks from Oasis were the most downloaded music in the year 1999. In 2001 her album Shanti Shanti reached the number 1 slot on the New Age Chart in the USA.

In 2003, Yashu set up her life in Goa, and was joined shortly after by her daughter Kavyo and her granddaughters. She didn't make it to record another album as she wished, because of ill health. She played some gigs in Goa with local musicians and friends from Pune times. She played her last magical concert with Harida and friends at Vagator, Goa, in March 2007.

In October she was diagnosed with cancer, and underwent surgery in Spain. She decided to come back to her home in Goa to take the post surgery treatment but didn't handle the chemo well. She went into the Journey to the Beyond, at 5am on December 3rd, 2007. It has been a beautiful Farewell, with many of her closest ones present. All who came for her Send Off have been deeply touched by her Life, Love and Laughter.