Born in Amsterdam (The Netherlands) in 1951.

Throughout my childhood I felt a strong need for genuineness and sincere love. I was aware of the masks of the people around me. Finally I developed a survival technique that in the end nearly killed me.

Osho makes his appearance In the late 1980s Osho came into my life. His appearance in a programme on Dutch television caught my attention. I began reading his books and I devoured everything about Osho that I could get hold of. What I really wanted to do was to just get on a plane and lay myself at his feet, but I was uncertain if I could trust my feelings and too scared to burn all my bridges and set off for India with my children.

Sannyas But it took till 2015 before I felt the urge to go to India. I went to Oshodam (New Delhi) for the three weeks of the Mystic Rose. At the end of this course suddenly I felt it was time for me to take sannyas. I looked in the eyes of Ma Dharm Jyoti and I saw Osho. Such pure bliss!

Osho guided me all the time! Now I look back and know that Osho was clearly guiding my footsteps, teasing me to wake up and become aware of who I really am.

Indra lives a Mojud-like life ‘on the edge’, continually aware of her connection with Osho and the Divine. The last decades include the formal conclusion of a declining marriage and the start of an intensive period as trainer, therapist and coach. www.indravisser.com (only in Dutch) describes the broad range of approaches that she integrates in her practice. 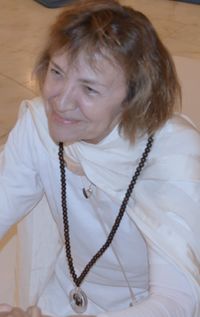 My story of personal growth and development
This is a lifelong journey for which I’m deeply grateful.
In 2016, as part of that journey, I made my second visit to India.
With (language) help from my beloved Anand Kaiyum, I wrote two articles about my experience, which have since been published on the OSHO News site.

Seven points of Mindtraining
I take part in a workshop based on Atisha’s meditations, run by Videha.
Atisha the Thrice Great (982-1052 AD) was a significant spiritual figure in spreading Mahayana and Vajrayana Buddhism in Asia.
He was one of the greatest alchemists the world has ever known…

Dropping the Mask – My journey inside
For as long as I can remember, I have always been on the alert, totally aware of the space I took up and how others were encroaching on that space, and whether it was safe enough just to be me.
As a little girl I had a problem with being highly sensitive.
In those days, that was something my parents (and school) considered…