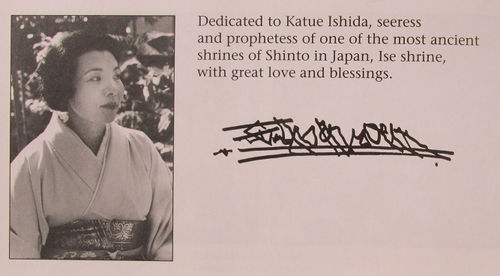 Dedication in No Mind: The Flowers of Eternity 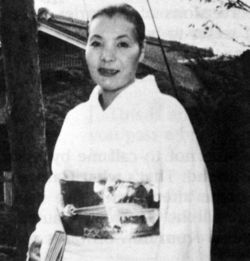 from No Mind: The Flowers of Eternity

She was in charge of the Yamato-hime chapel at the Grand Shrine in Ise, a coastal city 75 miles southeast of Osaka. Her ability as a channeller was widely recognised throughout Japan.

She was Osho's ambassador to Japan.

"I will tell you about the Japanese Buddhist seeress -- she has sent her picture:
"Katue Ishida, mystic of one of the biggest and most famous Shinto shrines in Japan, stated recently after seeing Osho's picture, that: This is the person that Maitreya the Buddha has entered. He is trying to create a utopia in the twenty-first century. Lots of destructive power is against Him, and some people call Him Satan. But I have never known Satan to be poisoned. He is usually the poisoner, not the poisoned. We must protect this man, Osho. Buddha has entered Him."
With great love and respect I accept Ishida's prophecy. She will be welcome here as one of my people, most loved. And by accepting Gautam the Buddha as my very soul, I go out of the Hindu fold completely; I go against the Jaina fold completely.
...
You will have to learn, Maneesha, not to call me by that ugly name again. I am just your friend. That's what Gautam Buddha's prophecy was: "My name after twenty-five centuries, if I can find a vehicle, will be Maitreya Gautam Buddha." Maitreya means the friend. From now onwards you will have to change your old habit.
I am your Beloved Friend. You can call me "Beloved Buddha," which simply means the awakened one. But we have to spread around the earth that I have denounced "Bhagwan." I have in fact, just one day, taken it on myself to denounce it. I don't have any rights on it, but I have every right not to call myself Bhagwan."

"I have to offer an apology to Katue Ishida, the seeress in an ancient Shinto shrine in Japan. I tried my hardest to accommodate a twenty-five centuries old, out-of-date individuality, but I am not ready to be in a self torture.
And Anando has to see me afterwards, to release the second story…because that makes me absolutely free from any kind of tradition. I used to think that Gautam Buddha is an individual—and that is true, he is. But even against his desire a tradition has arisen in Tibet, in China, in Japan, in Sri Lanka, and I don't want to struggle with these idiots. I want to work with my own people on my own authority.

"Ishida is here, sitting. She has come from Japan, from a Shinto temple. I will make her my ambassador in Japan—I have my ambassadors all over the world." 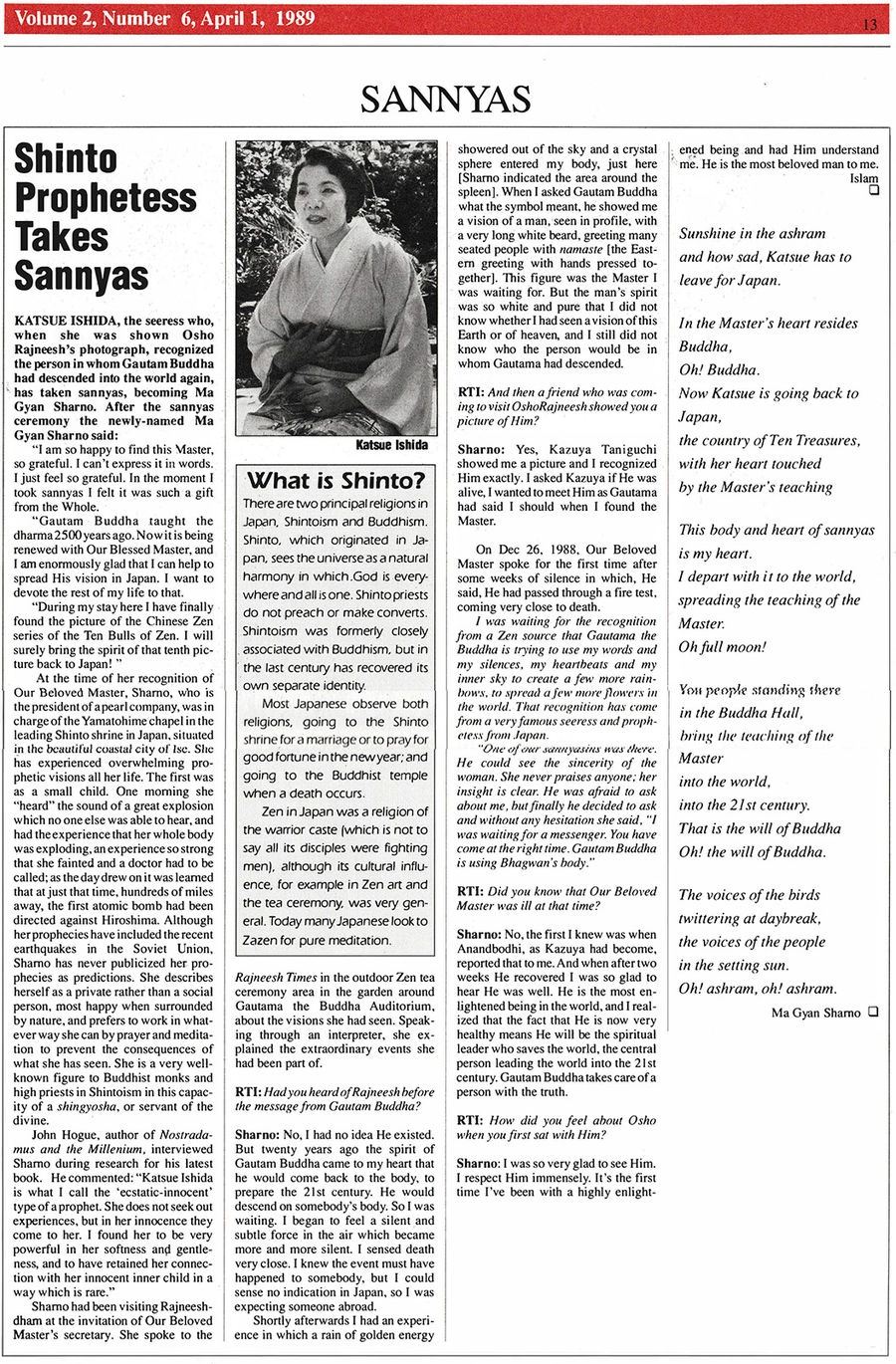 see also
Osho is recognised as Maitreya Buddha, and changes his name
From Bhagwan to Osho