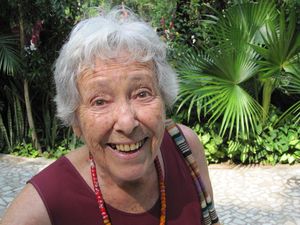 Jeevan in the 90ies

"Sannyas 1975, Pune 1, 2, 3 etc and Ranch, many autobios and articles on oshonews.com, was Osho Times Editor for many years, still active in the Meditation Resort and audiochecking Osho books, currently my 22nd book, The Book of Secrets

"Jeevan is always present in my thoughts, and I always call upon her when I need a cab, as she insisted that she had a 'taxi fairy' who helped her find cabs and rickshaws. She used to carry with her an army whistle which could be heard a kilometre away, and used it to stop rickshaws in Pune. She gave me one too, but when I used it, the cab drivers in Mumbai thought it was the police and ran away instead of stopping!

Jeevan and I became very close friends, and although she was old enough to be my mom, she used to call me ‘Mom' because I taught her to cook all over again, over the telephone!

How we met: I used to see this old lady, with a cup of coffee sitting alone under a tree, at the Poona Music Society Classical Music Concerts. Once I offered her a lift up to my place on Boat Club Road, and she took a rickshaw from there up to her flat in Koregaon Park. On the way, we shared our great love for music, and I told her about the Music Appreciation classes that were being held at the music school in Pune. From then on, we were the most regular ‘students' of the class. The class was actually started for the young music students of Pune, but we were younger at heart, and far more knowledgeable... and thus began a wonderful friendship.

We always dined out together after each concert, and she was a most entertaining conversationalist, and her eyes had a light in them! However, she could not overcome her hot temper, and became a bit jealous (like a child), if I spoke to or gave attention to a third person.

She had lived for 30 years in Pune, but no one had ever invited her into their home, as I had, and so she became very much a part of my family; my two children always enjoyed her company and were amazed at her energy and love of singing and dancing at her age! She was a born performer, and last performed with her son at the Osho Ashram.

The amazing thing about her was that she was so tech savvy, and learned things which even I don't do. She learned to use the mobile, and the internet, and became a blogger, and went on facebook etc. and always took up a challenge to learn new things.

Being with me, she changed her appearance, took more care about the way she dressed, and became quite a different person in many ways.

When I was in Bombay, I got a call from her at midnight: "Feroza, I have fallen down, and am in great pain!" I asked her what could I do from far away. Then I called my Acupuncture Doctor Yasmin, who rushed to Jeevan's house and got her admitted into the Jehangir hospital at 2 a.m.! Jeevan became very weak, and couldn't bear the pain, she asked me if I would attend her funeral. I could not, but my doctor attended on my behalf, and sang and danced with the Sanyansins all the way to the crematorium.

Jeevan always told me that she was well prepared for her death, and had made peace with all her 4 children. She was really one wild mother! I met one of her sons, when he visited her in Pune.

Souls like Jeevan never die, as they live on in our memories, ever smiling, ever ready to help... and she left a wonderful friend behind from across the seas… Samma... who continuously sends me such wonderful emails, which are highly appreciated by my friends from all over the world, especially my good pianist friend Alan Kogosowski from Melbourne. (Do look him up on YouTube!)