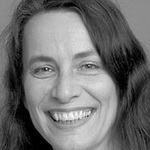 Sangeet was also known on the Ranch as Lawyer Sangeet. A graduate of the University of Oregon School of Law, she is a former legal aid attorney in San Francisco and a disability rights attorney. She took sannyas in the spring of 1981 at the Berkeley Center and became Ma Prem Therese.

Late that year she went to the Ranch, living first in Antelope and then in Jesus Grove. She worked with Wadud on the Land Use Plan and became the City Attorney when the city was formed. At that time Osho changed her name to Sangeet. She later became the city attorney for the City of Rajneesh (Antelope) as well.

After the Ranch she went to the Boston area, before returning to Marin County, California. From there she went back to Pune and worked at the Osho Times and the Mystery School. She also acted as Osho’s legal researcher and his legal representative in a Bombay case. For the last two and a half years of Osho’s life she lived in Lao Tzu.

From Pune she went to Japan in 1990 and then spent four years in the sannyas community in Maui. She ended up back in Marin County,and has been on the board of the Viha Connection and the editor of the magazine off and on for many years. She currently lives in Sonoma County where she is a writer and editor.

She returned to school to get an MA degree in theology, comparing the theological models of Osho and Teresa of Avila, and has published several books in the area of spirituality.

Sangeet also has an advanced certification in hypnotherapy.