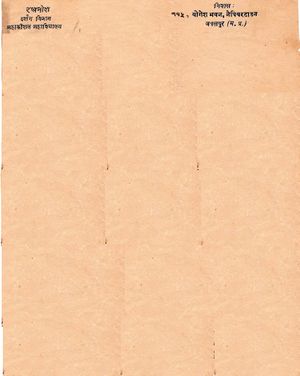 Osho began teaching in Mahakoshal Arts College in Mar 1958 and remained at this post until Aug 1966, though of course he was getting around India a lot during this time giving talks, satsangs and camps. Mahakoshal was one of twenty colleges affiliated with a newly accredited Jabalpur University. All this according to Neeten's Osho Source Book; lots more history of academia in Jabalpur is available there, in his Jabalpur section ("Part Two").

Where he lived at that time was a bit unclear. Neeten has him in a sort of rural slum in Bhaldarpura. Then, Neeten and Gyan Bhed have him moving to some other place connected with a person named Gupteshwar, but in a Letter written on 19 Jan 1960 to Deriya Ji, Osho indicates a return address of "Gupteshwar Marg" in Premnagar, a neighbourhood of Jabalpur. Gupteshwar Marg (or Road) is the main drag of Premnagar, so this indication shall be taken as the most authoritative.

Missing in this address is a number or house name to make the address more precise, but perhaps Osho made arrangements with the local postal people to get his mail delivered. Perhaps this is even how mail delivery worked in those days in many places. In any case, the letter to Deriya Ji is the only indication of an address we have from him before the Napier Town era.

The letterhead is a simple one, even crude. In the upper left corner, we have, in Devanagari:

And in the upper right corner:

A close look at the letterhead, or a survey of all the letters using it, shows that the 115 is actually not part of the printed, prepared letterhead, but inserted by hand. And it doesn't really work well like that, because it should go after Yogesh Bhavan and before Napiertown, but there's not enough room. Osho soon gave up on inserting the 115 and eventually got some new letterhead.

But not before many letters were written using it. These letters are listed below, with all but the first written to Ma Anandmayee: