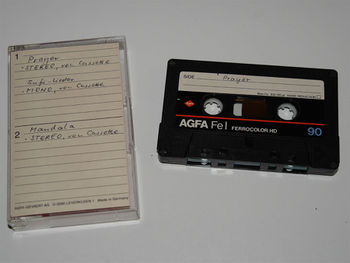 The tape with the Music Group is surely from before March 1978, could be made in 1978 or 1977. It contains on one side the music of the Prayer Meditation, on the other side the music of the Mandala Meditation. As the first side is not full maybe somebody filled the rest of the side with a few songs from Music Group. I love especially the last track. There were no titles or anything on the tape about these tracks. I added the titles.
For my ear, this is Music Group (or maybe Sufi Dance, but I tend to Music Group). In the fourth song I hear the voice of Anubhava. Not very loud, but in the typical way singing his own melody above the general melody. Also in Hallelujah.

About these four tracks, Sw Anand Prabhu reports this:

There is this 20 min long tape you call Music Group Poona 1. It consists of 4 tracks and I would guess it is pretty old , before 1978. But in my opinion this is not a regular music group at all! Listening to the text, level of difficulty, instrumental accompaniment (only one conga and little bit guitar) I am sure that this recording is a so called "serenade".
Serenades happened if some ashramite Sw. Vip or Ma Vip - very loved (not) person - would come back from the west, to stay this time "forever". Then his or her buddies would speed up lunch and meet at the working station of that guy/girl and serenade the return. Some very special, elaborate, remodeled songs, not for the usual Laufkundschaft, were sung, lots of hugs were shared and one knew he/she was home again.
From this recording only track 3 was usual.
Number 1 is the full text of a pop song, this did not happen in music group. (Editor: later on, this actually was sung in Music Group, see the link to Rivers of Babylon. Then it had different lyrics though.)
The fantastic No 2: Allah il Allah was never sung in that way by Anubhava in music group afaik.
And No 4: Listen is almost professional. These people knew their Kabir. It is in every aspect one of or the best takes of the whole of Poona 1. This is not an early version of There is so much magnificence, rather it is just a very special ashramite one.
During my time in 1980/81 I watched these rare events twice, wondering about the familiar and yet unknown songs. There definitely was a space, where "regular" sannyasins had no entrance to - and no knowledge of.

Writers
See the links to the individual songs.