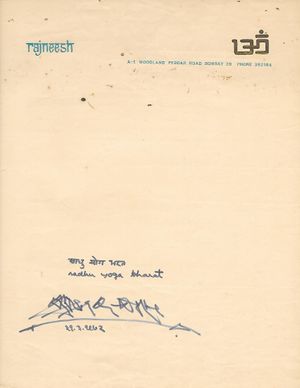 Letterhead is from Woodlands. It reads:

The logo in the upper right corner appears to be a stylized Om (ॐ). It is signed on Mar 31 1972, and though the location is not stated, it must have been Mt Abu, because that's where Osho was on that date, and lots of people were taking sannyas.

The name given is Sadhu Yoga Bharat. Bharat changed over to Sw Yoga Bharat in Pune in 1976, getting a second name paper at that time.