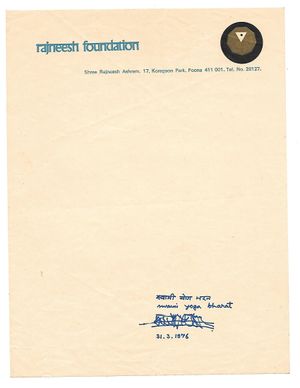 Letterhead is Rajneesh Foundation letterhead from Pune. It reads:

It is signed in Pune Mar 31 1976. It is the name-paper of Sw Yoga Bharat, formerly Sadhu Yoga Bharat. The letterhead is identical in all respects to that of Sw Amrit Bodhidharma except for its colour, which may come from the scanning, rather than an original colour.

Bharat's "conversion" came exactly four years after his taking sannyas as a sadhu.