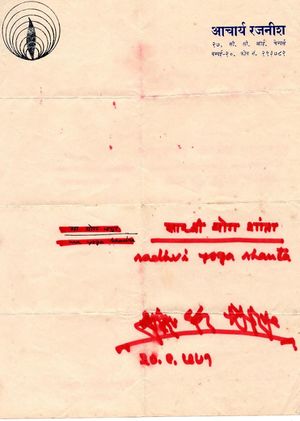 Letterhead is from CCI Chambers. It reads, in Devanagari script:

The logo in the upper left corner is the familiar Jeevan Jagriti Kendra logo. It is signed in Mumbai with the date somewhat illegible, especially the month, best guess being Sep 30 1971. The name written in black ink is Ma Yoga Bhadra, which was crossed out with red ink and replaced by the new name Sadhvi Yoga Shanta. It appears that the crossing-out is what is dated. The previous name was likely written well before that, especially given the stationery: he left CCI Chambers in Dec 1970 and would hardly have been using stationery so old.

This name-paper appears to be an unusual example of someone changing from a "full-sannyas" name to Sadhu or Sadhvi. See "Sadhu" and "Sadhvi" for more on this.