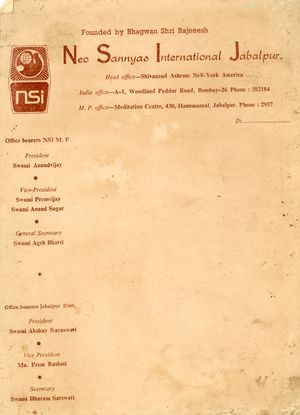 Although not legally registered, Neo-Sannyas International was set up as a worldwide movement by Osho in the early seventies. (see also Sannyas: Orange and Mala)

To add to the confusion, Neo-Sannyas International was also a corporation already set up in New York in the early seventies.

On another note, Osho requested the reinstatement of Neo-Sannyas International already on Oct 1, 1985, but that wasn't done until 1988 when it was advantageous.

Included in Beyond and Beyond (November 1970) and written by Sw Yoga Chinmaya:

“A variety of NSI activities are held regularly in Bombay and elsewhere for the benefit of spiritual seekers. These include:
1. Meditation camps. Several times a year for approximately eight or ten days, camps are held in India at scenic hill stations such as Mt. Abu, Matheran, etc.
2. Amrit Study Circle: A series of seven lectures in Hindi is given monthly by Bhagwan on the “Tao Teh King”.
3. Geeta Lectures: Several times a year Bhagwan lectures (in Hindi) on the Geeta, on open grounds.
4. Association for Understanding and Meditation (AUM): AUM is an organization of Bhagwan’s devotees who enjoy many special benefits. Monthly lectures in English are given by Bhagwan for approximately eight days on “Vigyan Bhairava Tantra”. Once a month a special darshan (spiritual encounter with the Master programme) is held with spiritual music, in meditative silence, at Woodlands (Bhagwan’s residence).
5. Divine Healing Programme: NSI sannyasins conduct Divine Healing experiments for those who need it, in Bombay, in meditation camps and in many cities in India.
6. Kirtan Mandalis: Six kirtan mandalis (groups of neo-sannyasins) have been formed by Bhagwan. They tour all over India to spread the spiritual message of Bhagwan.
7. Publication of Books and Magazines: NSI and Life Awakening Movement (Jeevan Jagriti Andolan, the brother institution of NSI, having non-sannyasins as its members), are publishing various books of Bhagwan in the Hindi, english, Gujarati and Marathi languages. They are also publishing the following periodicals:
a) Sannyas: An English bi-monthly magazine of NSI.
b) Jyoti Shikha (The Divine Flame): A quarterly magazine in the Hindi language.
c) Yukrand: A monthly magazine of the rebellious youth force in the Hindi language.
d) Yoga Deep (The Flame of Yoga): A fortnightly in the Marathi language. [Edited by Ma Ananda Vandana].
e) Tathata (The Suchness): A monthly booklet series in the Gujarati language.
8. Ashrams and Centers: At present there are seven ashrams and centers in various parts of the world. They are:
a) Ananda-Shila (Bliss Foundation): Ananda-Shila is to be constructed on 254 acres of land at Trimurti Hill, between Ambernath and Kalyan, 37 miles from Bombay.
b) Samarpan (Surrender) Rajneesh Sadhana Ashram: Samarpan, the first American ashram, is located on 94 acres of land. The address is Box 228, R.D.1, Martin Brooks Road, Unadilla, New York (U.S.A.). Tel. (607) 369-9482.
c) Vishwa-Need (Shelter for the World) Ashram: P.O. Ajol, District Mehsana, Gujarat, India.
d) Prem-Need (Shelter of love) Ashram: P.O. Piparia, District Hoshangabad, M.P. (India).
e) Ananda-Need (Shelter of Bliss) Meditation Center: This ashram is located in Nairobi, Kenya. Those planning to visit, should write to Ananda-Need, P.O. Box No. 72424, Nairobi, Kenya, (Africa).
f) Alok (Light) Rajneesh Meditation Center: Alok is located at 67 Chestnut Ave., Larchmont, New York (U.S.A.), in a suburban setting.
g) Nirvana Rajneesh Meditation Center: located at 82 Bell Street, London N.W.1 (England). This is the first center to be opened on the European continent. The tel. no. is 2620991.
h) Amrit Rajneesh Meditation Center: This is a new NSI center recently opened in manila, Philippine Islands. Those who want to visit should call 70-81-79 (Manila).

ANANDA-SHILA will be the permanent world headquarters of Bhagwan Shree Rajneesh. It will also function as the International University of Meditation. It will have a series of activities connected to the following:

1. A university for meditation, inclusive of departments, viz. (i) a training center for esoteric sciences; (ii) a training college for yoga and meditation; (iii) an East and west meeting center for psychologies and philosophies.
2. A research center in psychic sciences.
3. A yoga therapy center.
4. A naturopathy and acupuncture research center to meditation.
5. A research library for universal knowledge.
6. A publication center.
7. A temple for understanding: (This temple will represent ALL religions of the world, visibly manifested as sixteen gates opening into a central VOID space to represent the DIVINE).
8. Residential hostels for sannyasins.
9. A guesthouse for visitors and students under training.
10. A hall for meditation and international conferences.
11. Underground cells for deep meditation.
12. A cottage for Bhagwan’s residence.
13. Three hundred residential cottages for sadhakas (seekers).

For further information about activities and publications of JJK and NSI, please contact: