a variation of the logo used in publications

a variation of the logo used in publications 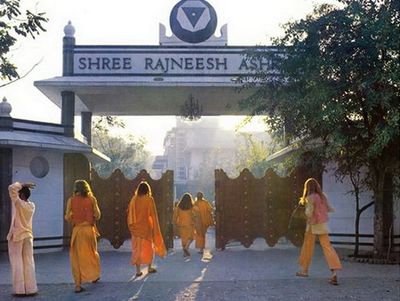 The Gateless Gate in Poona One. 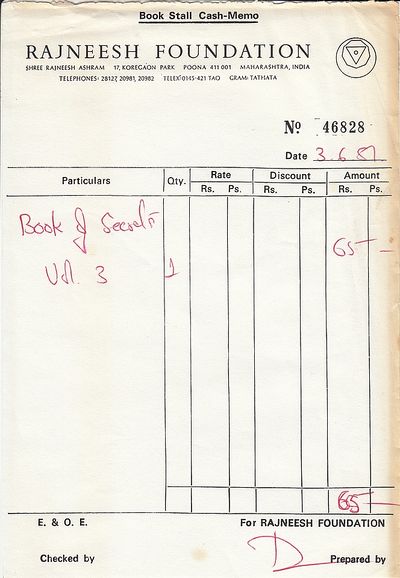 Rajneesh Foundation Book Stall Cash-Memo for The Book of the Secrets, Vol 3, dated 3-6-1987. 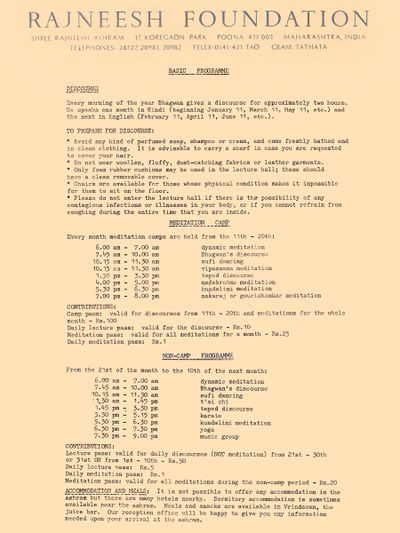 Neo Sannyas Foundation is a trust registered under the Bombay Public Trusts Act.

It was registered in 1969 as Jivan Jagruti Kendra and renamed to Rajneesh Foundation in March 1974 when opening its ashram in Pune (then Poona). It was given its current name in 1989.

There have been various disputes regarding its status as a charity. (see refs 1, 2 & 3)

Its symbol, displayed in the ashram and in books in multiple variations, was the one at top right, said to have been designed by Osho. As with the JJK symbol, it was not a fixed entity in colour or precise form. But there is an underlying numerical conceptual unity in all the variations, a single point / small circle inside a triangle inside a nonagon inside a circle. Osho was asked about it once and he said this, in Don't Just Do Something, Sit There, ch 3:

It is a very simple symbol. Just in the middle there is one point; that means one -- the ultimate source and the ultimate goal. The journey is from one to one. One becomes three -- the triangle around it: the trinity of christians or the three faces of hindu gods, trimurti, or if you understand the language of physics, then electron, neutron, positron... but one becomes three. Then three becomes nine, because each one again becomes three, and so on, so forth.
That nine is the symbol of the world -- the world of ten thousand things -- because nine is the last digit. From one to nine everything is finished; then there is only repetition. Ten, eleven, twelve; they are all repetitions. That is the symbol: from one to three, three to nine, and then again there is a circle, a big circle surrounding it. So the first point is the source and the last circle is the goal.
It is a very simple symbol.

This is the only occasion known where he has commented on this symbol. It is likely that, had more people asked, he would have said more, with variations and alternatives, just as he has said so many things about the longer-term symbols of disciplehood, orange clothes and the mala. Osho makes it clear for example that the symbology of "threeness" is wide open, so why not all of it? In the spirit of the Orange and Mala page, we are offering some alternative views on the meaning of the "Poona One" symbology on the right in Talk:Sannyas publishers and their symbols. One more theme which might be explored is the movement from one to three and three to nine. This is said to resonate with a saying of Kabir, though that could not be confirmed by a search using Roman characters (which should show up, with idiomatic translation, for any common saying of Kabir). A search in Devanagari turned up three possibly relevant examples. Results are posted in Talk:Sannyas publishers and their symbols.

In The Only Life, Laxmi is quoted to say:

Within just two months the Gateless Gate was finished. You, friends, see it every day. Marble and granite, the best Burma teak wood, bronze and brass and glass. Osho himself designed the emblem set in the arch above. You know what the embem symbolises?
The dot in the middle of the triangle is oneness within the all. The triangle stands for the trinity of the Creator, the Preserver and the Destroyer. They are set within a nine-sided figure which symbolises the planets and our solar system. All is held together by the outer circle. This emblem describes our inner process towards universality. Everything about us is to enhance our inner journey. That's what Laxmi has found.