One – Soundscapes by Sid Hille

Conceived as a 'multi-instrumental solo performance' Sid plays all instruments, such as the piano and other keyboards, flutes, percussion, autoharp, voice, ukulele and electronics such as the Theremin or the IPod Nanostudio. 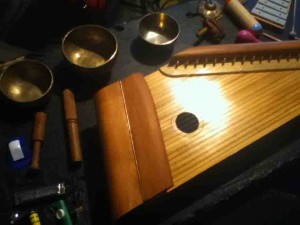 Label (Distributor) : SatnaMusic
Format : video DVD
Artwork :
Note : When Sid Hille was preparing for his solo recording ONE during fall 2010, video artist Pia Antikainen filmed the process. The DVD contains a 30-minute documentary and also a 5.1-surround version of the originally only on vinyl released music.