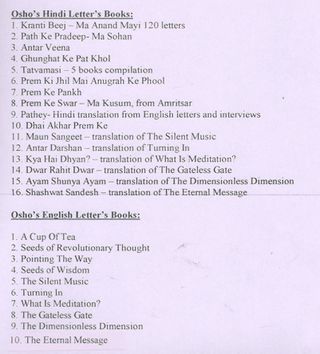 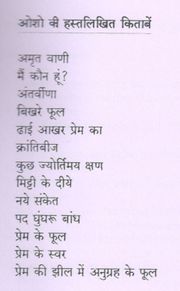 The sources for this page consist of images of two emails sent by Jagdish. The first is extracted from an email he wrote to Anando, in which he was just beginning to gather some information for her. Some of it is clearly wrong, about some of the English books which were translations, as it was in an early stage of his project, but the Hindi translations of English original letter collections seems useful. The context of the second, in Devanagari, is unknown and though short, it may also have useful new information.

In the spirit of potential usefulness, they are hereby and therefore reproduced here. It will be noted that Jagdish's Hindi transliterations in the first image employ different criteria than current wiki equivalents, so in some cases they have been altered to conform to the wiki's standards.

Hindi translations, per the first:

As it happens, the wiki's current page for Moun Sangeet regards a Diamond book of letters consisting of not just the thirty from The Silent Music but translations of all six of the above English original letter series, all written in a period of prodigious output in Apr-May 1971 (possibly not including Dimension, whose precise period is unknown). Nevertheless, since Dhyan Kya Hai has appeared separately, it is wise to assume that the others may have done so too. Renderings of these titles above have been according to how they have been done in Diamond's Moun Sangeet.

The Devanagari image is concerned with a broader picture, not just books of letters but books of all types of Hindi writings. It is far from complete regarding manuscripts, and may have been generated at a similarly early stage of gathering information, but it does point to certain books as writings rather than transcripts of discourses, so they may be worth considering.

Most of the books in his list ARE letter collections. The non-letters books are:

Amrit Vani (अमृत वाणी) -- known mostly as a six-chapter component of Main Kahta Aankhan Dekhi (मैं कहता आंखन देखी) of unknown provenenace, but a larger version of Amrit Vani IS mostly writings (also found in MKAD) plus the six chapters. It may be the larger version being referenced here, or it may not.
Bikhare Phool (बिखरे फूल) -- a book certifiably composed of early writings
Kuchh Jyotirmaya Kshan (कुछ ज्योतिर्मय क्षण) -- sources for half this book are found in Osho's manuscripts but there exists an alternative view that it is a book of writings of Ma Yoga Kranti, Osho's cousin-sister. Jagdish's list will lend more weight to the non-Kranti portion.
Mitti Ke Diye (मिट्टी के दीये) -- early writings
Naye Sanket (नये संकेत) -- a collection of many short notes translated as the "Random Thoughts" portion of Wings of Love and Random Thoughts. Interestingly, the "Wings of Love" portion of that book was translated from Prem Ke Pankh (प्रेम के पंख), said to be a single-discourse book, NOT a book of letters as thought in the first list above.