Osho International Foundation was registered in Zurich, Switzerland on Nov 4, 1984 under the name of Rajneesh Foundation Europe (RF Europe).

RFE was set up as a non-profit corporation by Rajneesh Foundation International (RFI, USA), the foundation that owned the Rajneeshpuram property.

It was renamed to Neo-Sannyas International Foundation (NSIF, Europe). The exact date is unknown.

This was a short lived name that was used from 1988 to 1990.
After the closure of Rajneeshpuram, Osho transferred the publishing licence back to the Rajneesh Foundation (RF India). He refused to transfer the licence to Rajneesh Foundation Europe. In turn, people in charge gave BOTH foundations the same name for the first time - Neo-Sannyas International (Foundation) and finally Osho International Foundation. This allowed OIF later on to claim that Osho transfered his copyright to OIF, Switzerland, dispite Osho's intentions to keep the publishing licence in India. (see ref 1)

On Apr 25, 1990 NSIF changed its name to Osho International Foundation.

A year later a new trust under the same name, Osho International Foundation, was incorporated in India.

All trustees were removed from office for a few months following a complaint by Robert Doetsch (Sw Ramateertha). (see ref 2)

According to Osho News, "...it was reported that OIF is over-indebted by more than nine million Swiss francs, and that the foundation’s status as a charity was revoked by the Swiss tax authorities in 2012. Among other things there is concrete evidence indicating that money that was actually due to the Foundation has been redirected into other channels – possibly into private companies of which former Foundation board members are beneficiaries." (see ref 3) 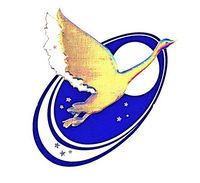 "Flight of the alone to the alone"

The swan logo came into use in late 1989 but was not used much in an official way, retiring possibly as early as 1990. It is not known to have been used on any books, and even the high-profile White Swan Brotherhood's existence was short-lived, becoming the White Robe Brotherhood on Oct 1 1989, exactly the date of RTI's last issue, (with cover story the White Swan Brotherhood but logo still the last gasp of the Ranch-era two birds). Osho did wear this Swan image on the shoulders of his robes, but only a few times. An original painting by Ma Prem Prartho, upon which the swan logo was based, appeared as an endpaper in No Mind, published in Sep 1989. No more image-based logos were created after the swan, though Rebel's flames continued to be used for another twenty years or so.

"Font-based logo" refers to the highly stylized form of Osho's name adopted for "branding" him. The all-caps format is used just about everywhere his name is used, except sometimes in paragraph text, and with ™ and ® usually not far away. And much of the time, there is a specific font family used, variations of Futura font.