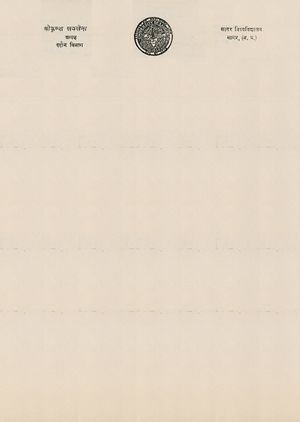 Dr SK Saksena was one of Osho's professors at Sagar University, where he went to get his MA in philosophy. He and Dr SS Roy, a fellow professor there, were among Osho's most revered, helpful and loved mentors along the way. The respect and love flowed both ways, so much so that Osho lived in their homes for long periods, a highly unusual arrangement to say the least.

A gifted student like Osho does not come along every year, but on the other hand, neither do teachers as open and engaged as these two men. Perhaps the fact that two of them could be in the same faculty at the same university says something about the vision of the University's founder, Hari Singh Gour ...

The letterhead on the left reads "SriKrishna Saksena ... Darshan Vibhag (philosophy dept)", the missing part of which is a word possibly meaning something like instructor but currently not yet deciphered. On the right, "Sagar Vishvavidhalaya [University), Sagar (MP)". And in the middle is the University's logo, apparently created at the University's founding only eleven years earlier and already with several obsolete features.

On the top it reads "FOUNDER - SIR HARI SINGH GOUR", below that, "UNIVERSITY OF SAUGAR", at bottom, "LUX BY LUCK", and above that, straddling the "1946" in Devanagari is "Vishvavidhalaya Sagar, CP". The "CP" stands for Central Provinces, the old name for Madhya Pradesh which was obsolete in one year, as was the picture in the middle, which has a map of pre-Partition India underneath something not yet known.