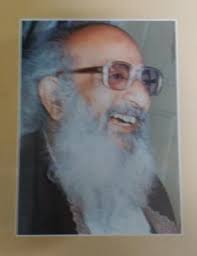 Rajendra Anuragi was born a Taran Panth Jain in 1931 in Hoshangabad, MP. Osho has called him a childhood friend but the details are not yet known, other than that they were at university together in Sagar getting their MA's, Osho in Philosophy, Rajendra in Hindi Literature. Since then, after he became well known as a poet and writer, they spoke many times from the same podium, at Taran Panth functions and All-Religions Conferences. He took sannyas from Osho and spent much time in Pune, often reciting poetry during celebrations. He also had a long career in the state government of Madhya Pradesh. He left his body in 2008. 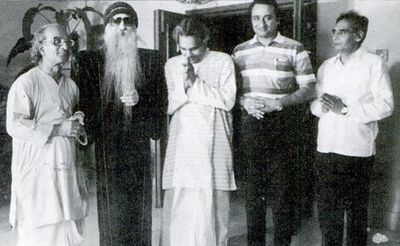 Near the end of his time in government, he visited Osho's commune in Pune, likely at the time of the photo. Osho said about this visit:

Now sitting here is Rajendra Anuragi. He has a high post in Madhya Pradesh, deputy-director of communications. And because he has come here... He is only on leave; after the leave finishes he is going to take retirement.
But rumors must have spread, and the government is threatening his wife, "You vacate the government house," and, "We are going to cut off the electricity, telephone, water."
But Rajendra Anuragi is made of a different mettle. I know him from my very childhood. I have sent him a message, "Don't be worried by such political pressures, just tell your wife and your children that if the government takes the house, `Here is your home, you can come here.'"
But Rajendra Anuragi is not to go back. Going back is very cowardly. And all these threats -- they have not taken the house, they have not cut the telephone -- all these threats are simply so that his wife becomes afraid. She has had a heart attack, she has been hospitalized, the children must be worried -- naturally the government must be thinking that Rajendra Anuragi, seeing the situation, will come back.
For a courageous man, no situation exists which can change his mind. He has come here and if the government wants the house -- although it is illegal, he is only on leave -- they can take the house, they can take the telephone and the electricity and the water, but not before his retirement.
But they cannot threaten a man.... This is how the crowd goes on threatening everybody and keeps everybody as sheep. Religions force you to be sheep. All the religions want followers, but this place is for the masters. Here is no crowd, but an assembly of lions, just meeting together. A few lions are asleep...

(THERE IS A LOUD BELLY LAUGH FROM SARDAR GURUDAYAL SINGH.)

It does not matter, it's just an old habit. They will wake up when they will hear Sardar Gurudayal Singh.
~~ from The Miracle (discourses), ch 4