From The Sannyas Wiki
Revision as of 00:25, 15 September 2020 by Sarlo (talk | contribs) (Created page with "240px|right Surdas, the truck farm, was a large-ish sub-department of Dadu, the farming "temple". It was a decent-sized vegetable and flower gar...")
(diff) ← Older revision | Latest revision (diff) | Newer revision → (diff)
Jump to: navigation, search 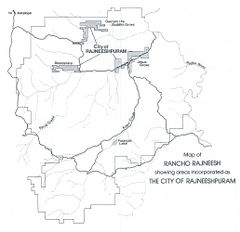 Surdas, the truck farm, was a large-ish sub-department of Dadu, the farming "temple". It was a decent-sized vegetable and flower garden, covering about ten acres of the only naturally fertile soil on the otherwise barren ranch. It was at the end of the road which ran from "downtown" Rajneeshpuram northeast to Radha River, known to those outside as the John Day River. On the other side of the river lived Jon Bowerman, the reclusive son of the founder of Nike.

Some of the vegetables grown there were offered for sale in Oregon markets but most went to feed the growing vegetarian population at the ranch. It was, like almost all agriculture at the ranch, completely organic, with a huge variety of vegetables. It had its seasonal limitations of course but whatever was possible was being done, for example a large root cave was dug under the ground to keep root vegetables cool most of the year and above freezing in the very cold winters.

For a bit of winter ambience we have this account from Savita's blog, Dancing Buddhas: "Whenever any one of us was too cold to bear it any longer, we would run across the lumpy field to where a huge bonfire was kept burning, and there we would pack our retrieved spuds into foil and stick them into the embers. And while waiting for them to cook, we’d go dancing around the fire like a bunch of stereotypical native American Indians.

"After all, how else are you going to keep warm in minus zero degrees?"