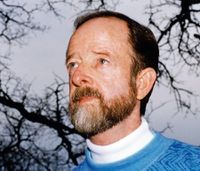 Santosh was born in Indiana in the States in 1930. He studied psychology but was not satisfied with its limited perspective, so he dropped out of his comfortable set-up and went to Europe, ending up in Germany. To broaden his perspective he studied mysticism, transpersonal psychology and other aspects of the human potential movement, which was catching on as an alternative to the stultifying mainstream of psychology.

He came soon to learn that these pursuits converged in Osho and so he landed in Pune in 1974 and took sannyas. There he created the Dehypnotherapy group, its premise being to wake people up from the hypnosis of their collected stories and ideas about who they were.

After the Ranch he drifted away from Osho's influence and in 1990 went on a lengthy desert retreat, emerging with his new name Jeru Kabbal. In this new phase, he developed the Clarity Process and Quantum Light Breath. He left his body in May 2000, after the failure of a second kidney transplant. His processes are still being offered by his students.