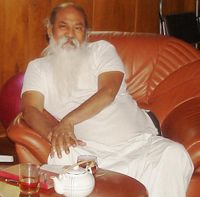 Satyatirth was born in Kolkata on June 1, 1950 but moved soon to Gorakhpur and then Ahmedabad. He was "just" a rickshaw driver, but knew "this is it" upon meeting Osho in 1969.

In 1987, Osho sent him to Japan. Soon, he and his Japanese wife Ma Gyan Patra opened the first Osho center in Japan, Osho Sakshin, and soon after that Osho Prem commune, in a beautiful forest in Japan. They created a chain of world-class Indian vegetarian restaurants Natraj, in many cities throughout Japan. Their publishing company Shimin put out Japanese translations of almost all of Oshos English books.

And there's more ... In the late 90s, he visited Osho’s birthplace in Kuchwada. It was run down and uncared for, so ... he bought it, restored it, built an ashram Osho Tirth Kuchwada, with a big pyramid meditation hall and many acres of land for organic farming. He also opened a charitable hospital, Osho Nani Ma, in honour of Osho’s maternal grandmother. Kuchwada is now (non-)seriously on the sannyasin pilgrimage map.