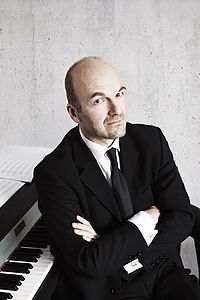 Born in Freiburg, Germany, in 1961, Sid finished high school in 1980. He traveled for several years, living in the United States and in India, until he settled in the Netherlands in 1986. He enrolled at the Utrecht School of the Arts in 1987. He studied piano, jazz improvisation and composition with Bert van den Brink, Jasper van't Hof, Willy Muller and Wim Witteman and graduated in 1993 as a Master of Music.

Since summer 1994 he has been living in Finland, where he was head of the jazz department at the Ostrobothnia Conservatory in Kokkola from 1994-2002.

Next to his reputation as a passionate and successful jazz eductator Sid has in recent years developed a good name as a performer, recording artist and producer as well.

In 2000 he published 13 Jazz pieces for piano, a book with a collection of his compositions for teaching purposes.

He has performed in solo concerts and with his quartet on festivals and tours through Finland, Sweden, The Netherlands, Belgium and Germany. In various other bands and settings he has toured and played in most European countries, in India and the USA.

As a composer Sid has been successful with big band compositions, chamber music and film music.

In 2008 he won the first prize at the international composition competition Scrivere in Jazz in Sardegna, Italy. The International Society of Contemporary Music (ISCM) chose one of Sid's bigband compositions to be performed at the World New Music Days 2010 in Sydney, Australia.

Next to his love for music he has been interested in meditation and philosophy. He started practising Yoga at the age of thirteen and in 1981 met Osho. The 1997 recording Deep North - The Quiet Place is a hommage to the times he has spent in Osho's commune.