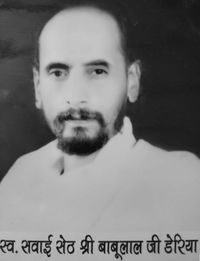 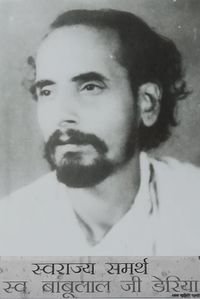 Swarajyanand, born in 1917 or so, was better known by his birth name, especially his last name. In his younger days, he was a prominent "freedom fighter", campaigning hard for India's independence from the British colonists of the time, working alongside Gandhi and Nehru. During this time he became acquainted with Osho's father, a fellow though less prominent freedom fighter and also both were Taran Panth Jains. In the time Osho knew him, he lived in Babai, MP, about 100 km from Gadarwara.

Osho wrote him many letters, of which the wiki has images, links below. These are some of Osho's earliest known letters. Deriya Ji helped him in many ways and became an early sannyasin, his new name honouring his freedom-fighter past. He left his body Nov 2 1972, about a year after he took sannyas.

Sw Ageh Bharti devotes an entire chapter of his book Beloved Osho to Deriya Ji. He visited mutual friends and gathered stories and photocopies of Osho's letters to him; the chapter includes translations of each of them.

Ageh points out that Osho, in addressing Deriya Ji with words like "respected" and "revered", is not merely showing a conventional deference to an elder. Far from it, as conventionality is not his way. He was sincerely impressed with Deriya Ji's qualities of awareness and courage.

Deriya Ji used to give discourses in the Taaran Taran society and through this met Osho's father and his growing family. Ageh says, "He was endowed with the remarkable quality of spotting brilliance whenever and wherever it could be deciphered. Not only this, his endeavor always was to brighten and polish the spark hidden within with all his might. Deriya ji used to tell people that he had predicted to Osho's parents when Osho was ten or eleven years of age that this boy was going to be a Buddha".

And Deriya became a great help to Osho in the early years after his enlightenment, introducing him to many well-connected people who arranged speaking events and got him his posts in Raipur and Jabalpur after he got his MA. We can quote one of Osho's letters to him here, the undated one he wrote on his beloved Prof SK Saksena's letterhead from Sagar:

Respected Deriya ji,
Hope my letter from Gadarwara has been received by you. Immediately after, I left for Sagar. I may be awarded a scholarship of Rupees. 100/- from the Sagar University but I feel that at this stage I should help the family. Hence, I intend taking up a job and continue my Research work side by side. Yesterday only! discussed the matter with Seth Bhagwandas ji. In the current session, there is no post vacant in the province for a Professor of philosophy. Outside the province, of course, I have put in a few applications, but I have no inclination of leaving the province and taking up a job elsewhere. Therefore if you can conveniently create a place for me in Basoda College, please do. In this very context, I had a talk with Sethji. He has advised me to go with you to Basoda and meet people like Ramdas ji there. I hope that something or the other will come out of this deal. From Basoda I hope to serve society as well as Sant Taaran literature and do justice to both. Moreover, by and by that college can be converted into a centre of studies into religion and philosophy. Personally, I was not even aware of the existence of that college. Awareness came from Dalchand ji. I shall be leaving for home in a day or two and hopefully shall come to Babai from there only. If need arises you shall have to go with me to Basoda to make some arrangement. I shall be with you latest by 30th and then decide the future course after having discussed the entire issue with you there. Rest is all fine. After coming here, I suffered from influenza but am all right now. Dues to all.
Pranam from Rajneesh

Below is his obit from Yukrand: