(*1) Text of Osho.com library differs a bit from two printed editions: edited or more close to audios?
(*2) Source of part of day (am, om, pm) is text of talks.
(*3) First part of audio (before 40:30) looks as one event, which ends with Osho's traditional salutations, then it is heard applause. After a little break it sounds as another recording, which corresponds to ch.3 of Star ed.
(*4) Chapter 3 is short (in two times shorter than next chapter) as well as corresponding chapter (5th) of Osho.com library. Small additional text presented in Osho.com library means that this event can be continuation of other event. Second event?
(*5) Audio #4 breaks at 33:18 with sound out and after a while continue with worse quality. This matches 5 missing paragraphs in Star 1976 ed.
(*6) In an earlier version of the OSHO.com edition (from the Khajana collection), #04 and #05 were separate per event ~04 and ~05. So apparently the lumping together of #04 and #05 happened after about 2012. 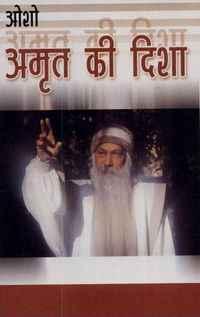 About the Diamond edition, they may or may not be different numbered editions, pub dates, etc, but there are at least two alternative covers, found fwiw on different booksellers' pages. Additionally, though the same ISBN-10 number was found throughout, the ISBN-13 number had two alternatives, found in equal proportion and both at "reputable" and reliable sites. They differ only in the last digit, which seems unlikely as that's supposed to be a "control" digit to validate the other 12. But they are both out there and so here they are: ISBN 9788128807077 and ISBN 9788128807076, for further deep research.

Here are the two alternative cover pics, one an unprepossessing small normal book cover-type thing and the other a large and, considering its unusual qualities, very unlikely one. But it's from G**gle Books, complete with a peek inside at the text, so it's included here.

There are two versions of an audiobook on offer, from Osho World and osho.com. They have five and four titles respectively, and consisting of the first four titles above with a new fifth title at OW, निर्विचार साक्षी. In its offering, osho.com acknowledges that the fourth and fifth talks are combined, but uses just the one title for both. Why the new fifth title is different and what happened to the others will have to remain a mystery for now. -- doofus-9 22:57, 17 February 2017 (UTC)

I have a question about the above post. I understand that OW offers 5 titles, osho.com 4. Why then would osho.com acknowledge combining of 4 + 5 when they have only 4? And just to be sure: numbers 5 - 8 above have now been identified as being Samadhi Ke Teen Charan, right? --Sugit (talk) 15:23, 23 October 2018 (UTC)

The last 4 talks of Amrit Ki Disha have been published as Samadhi Ke Teen Charan (समाधि के तीन चरण) and have the same chapter titles (source: Sw Jagdish Bharti). Howewer, it is unclear what book was published first. Also Jagdish Bharti provided dates for the first 4 talks, so the core Amrit Ki Disha, see June of Osho Timeline 1965. For the last 4 chapters, see the 4 talks of Samadhi Ke Teen Charan in December of the same year. --DhyanAntar 10:51, 23 October 2018 (UTC)

It's unclear this is true or not, but the list "Hindi-Diamond" from Shailendra states that this book originally had 6 chapters and later was been republished under the same title by Diamond Books.--DhyanAntar 05:35, 12 November 2018 (UTC)

It is likely Amrit was published first, with its talks coming some six months before SKTC's talks, if only because first-in-first-out is how it usually went in Hindi pubs, especially in the earlier days, though not always. OIF says that SKTC was published in 1965, which, considering the talks were only given in mid-Dec 1965, is quite a stretch. Perhaps they were confused with either Amrit or with SKTC's discourse dates. Why they came even to be thought of as talks 5-8 of Amrit is a mystery though. Why bother if you're going to put out SKTC anyway? Perhaps a later Amrit came out with all eight. Seems better to keep them completely separate.

Just to muddy the waters a little more, we have images of Jagdish's Dates and Places for these two series. For Amrit, we have a 5th talk indicated, with even a venue (city not stated but Mumbai hinted at) but no date. And for SKTC we have it clearly stated that SKTC #1 = Amrit #5, but in Ahmednagar, like the other SKTC talks.

Hard to make anything of that, but fwiw . . . More info needed? Less? That fifth talk has an almost-existence here, just like in the different audio versions. Then there's Diamond's 6-chapter book. More conjuring? -- doofus-9 03:56, 25 December 2018 (UTC)

No dates stated in Star edition.