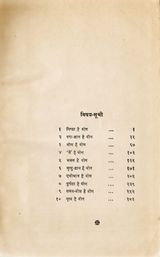 Interesting! The TOC given in the Contents image of the 1973 first edition has completely different titles from those in the 1999 8-vol edition of these talks on Adhyaya 7. Table below shows them both. Likely the earlier titles were deemed too formulaic to be marketable in the more sophisticated 90s, so all-new titles were rolled out. (And Osho's emphatic point regarding the validity of many different approaches to unity is lost in the process.) It remains to be seen what happened to other chapter titles in the first editions of Geeta Darshan. (As of this writing, this volume is the only first edition the wiki has info for.)