(*1) Order of chapters in 1975 ed. is not choronological and differs from other sources and editions. Some detailes from discourses (ch.numbers are from Shailendra's PDF; translations from google translate):

Ch.1: first talk of the series. "So in today's discussion on the first day, I want to say to you: there is an eagerness to get the soul..."
Ch.2: it seems morning talk of questions/answers. "And many questions remain, I will discuss them tomorrow morning, day after tomorrow." This is first question/answer talk of three. We think that it is morning talk because we trust to dates from Jagdish, where morning talks were Q/A.
Ch.3: "I told you these three small sutras today. I have to talk to you a few more things tomorrow. I told you these three sutras: Idea should be born, there should be fair mind, there should be conscious consciousness. These three sutras become the path of the arrival of truth in the life of which results."
Ch.4: second questions/answers talk. "There are some more questions, I will talk to you tomorrow morning."
Ch.6: last questions/answers talk and last talk. "Here, my discussion of three days was in this direction that a question might arise in you, who am I? Maybe someone asks. So after talking about the last one incident, I will finish the discussion." As last talk was in a morning according to Jagdish dates, then this last talk confirmes that morning talks were Q/A type.
Ch.7: at many places Osho is talking about girls, girl education and love, so it seems he is adressing audience as feminine.

Besides it, dates of 1975 edition are in choronogical order, so they do not belong to their chapters.

(*2) The date is based on: according to 1975 ed. two talks were on 15 Aug (the book gave the info: 1 talk on 12 Aug 1967, 2 talks on 13 Aug, 2 talks on 14 Aug and 2 talks on 15 Aug), one of them is last talk of the main series. So that additional talk, which is not related directly with first 6 talks, was given after last morning talk. Other source Osho's Appointment Diary 1967-1970 (translated source document) tells: a talk in Women's College on 15 Aug 1967. The college had name 'Women's College of Arts' at that time, before 1960 it had name 'Ratnachintamani School', and in 1968 it's got new name as 'Smt. Prabhakunwar Nathalal Doshi Women’s College of Arts'. Jagdish calls it "Ratna Chintamani School" and puts it on 14 Aug afternoon. The Reports manuscript also puts it on 14 Aug afternoon. It needs a confirmation.

Jeevan Darshan does appear in several booklists, so one can presume it was once published, but no specific biblio-data has yet been found by yr faithful editors. OTOH, there is an earlier book of letters published in the early 60s with the same title, so it is possible that references are to that other book, with this book never having been published. -- doofus-9 (talk) 23:27, 3 October 2014 (PDT) 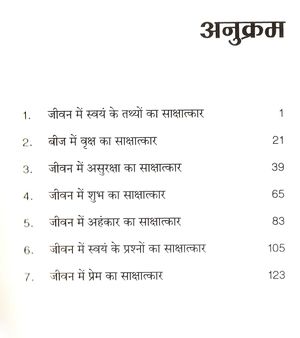 Now (Jul 2017), the book has duly shown up, likely published in 2016, that presumption based on OIF's copyright claim, as is the presumption of 1967 for the talks dates. So far, it may only have been published by OMI, besides the presumed 1975 edition.

Discourse / chapter titles are somewhat repetitive. There is one difference (underlined) in titles between the OW audio version and the osho.com audiobook, in the 5th talk, where O.com has अहंकार instead of स्वयं. That difference persists in the book (image above right), ie OMI's book's title is the same as o.com's audiobook's. Theories may abound concerning this difference. The OW title is likely older, therefore OIF's version can be deemed an updating, with whatever motivation. That OW's earlier version is a simple mistake cannot be ruled out. -- doofus-9 17:40, 26 July 2017 (UTC)

And now we have some info, below, about the talks that comprise this book, source Jagdish. Unfortunately, this info conflicts with some we already have, concerning Satya Ki Pahli Kiran (सत्य की पहली किरण). They crash in the Timeline. SKPK's info there is somewhat conjectural and was entered provisionally however. It was derived from Neeten's Osho Source Book and can be viewed at SKPK's talk page.

Looking into Shifting content in Hindi books (source document), we see that every one of Satya Ki Pahli Kiran's chapters has appeared in other books as well, and a variety at that, making it look more like a non-original compilation. It has two chapters in common with Jeevan Darshan, which may have been what allowed SKPK to claim those dates.:

All this considered together with the new Date and Place info on Jeevan Darshan, a good case can now be made for JD to take its space back.

Some two typos in dates (ch.1 and 6 - year 1969 while all rest chapters have 1967) in presented images of Star edition (1975), but all 7 chapters have one place, Ghatkopar, Bombay, and dates look like solid period.