About the date, Neeten's Osho Source Book (Bibliography section) names JJK as a publisher of Osho's books going as far back as 1962. But there is only one JJK book that early and then nothing more till Sadhana Path (साधना पथ) in 1964, then the stream slowly increases. It looks fairly safe in the light of this to date JJK back at least to 1964.

There is one other thing here. Four varieties of transliteration of जीवन जाग्रति केंद[see below] have been mentioned on the article page. Neeten has supplied many more, in connection with both English and Hindi books. But there may be an issue with the quality of the information. With Hindi books, most of them would not be very likely to render the publisher's name in Roman characters, so where Neeten got all these names is a bit of a mystery. It is possible that they have been created in the libraries and database places where he did his research, not supplied by JJK itself. Thus, their reliability may be uncertain. Anyway, here they all are, all found in citations of JJK and related books in Neeten's OSB Bibliography (first rough version).

Besides all the combinations of Jivan / Jeevan and Jagruti / Jagriti, there are the occasional Jiwans, Jevans, Jivanas, Jagratis, and, though Kendra has no alternative transliterations, it has on occasion been replaced by Sangh, Sangha, Kendra Prakashan, Andolan Prakashan and Andolana Prakashana.

Possibly notable in connection with the question of dates, ie when JJK began, are Jivan Jagriti Sangh, named as the publisher of Sadhana Path in Dec 1964, and a minor variant, Jivan Jagriti Sangha, named as the publisher of Sadhana Path's translation in 1965. There are few other books published in 1965. Of the four others mentioned, two have varieties of JJK in Mumbai, one the publisher is not stated and one is published by a private individual. JJ Sangh is not named again in connection with publishing. We may speculate that this was an early experimental name that was finally rejected in favour of JJK. -- doofus-9 02:04, 16 February 2016 (UTC)

Sure, the variations are due to transliteration, not counting Sangh(a), Andolan(a) and Prakashan(a). But transliteration of what? The current Devanagari form was not obtained from looking in hard copy, nor even publisher info from inside the book electronically. Essentially, there are no Hindi sources connected with our version of JJK. It was obtained from G**gle Translate, which has now been found to be unreliable, even though it gave me जाग्रति for both Jagruti and Jagriti. I should have had my suspicions but i didn't. Will now be more vigilant. Here is the thing:

There is actually no other source for जीवन जाग्रति केंद्र (the version used prior to this writing) besides the wiki. This should not be so! So i went a-searchin', in dictionaries (not easy!) and other places for the Devanagari version of Jagruti (Jagriti / Jagrati). To make a long story slightly shorter, i finally ended up with जागृति. Along the way i found even some dictionaries using the other form, assigning it the meaning "awakening" and everything, but rendering it usually as Jagrati.

Then i also found out that केंद्र (Kendra) was wrong as well!!! (That too from G**gle Translate.) It should be केन्द्र. These mistakes (or inconsistencies if you prefer) are easy to make because "n" and "r" can stand for lots of different forms in Devanagari. (But still G**gle Translate should recognise commonish words.)

Anyway, there were multiple hits for the new JJK (जीवन जागृति केन्द्र) in real and relevant historic info sources, such as Ageh Bharti's books, Diamond editions of old Osho books and a Jain bookseller still trying to sell a copy of Gita Darshan from 1973 at the 1973 price! Hit gold with that one.

So will start the process of changing over. FWIW, this new form of Jagruti / Jagriti, जागृति, rings more true, based on the गृ phoneme. That little thing ृ that hangs down from the ग is the form which appears in a number of similarly ambiguous words. It is a "diacritic" which attaches to consonants to denote a funny sound in Indian languages not used in Western ones called a "vocalic r", pronounced most like "ri" as in Krishna, which you sometimes see written as Krsna (though never Krushna). But when an ambiguity between "ri" and "ru" shows up, i should be alert for that ृ. And Jagrati really is a more accurate rendition of जाग्रति, the old one. But any and all versions will continue to overlap, i'm sure. -- doofus-9 06:30, 17 February 2016 (UTC)

I wrote that i would start the process of changing over. That means a move. But i was referring only to the Devanagari portion. What about Jivan / Jeevan? I see there are more Jivan's than Jeevan's, which is likely the basis for our usage. But maybe the existence of that invoice, a real source, with "Jeevan", should over-rule that greater frequency. Or is the greater frequency based on real sources too? Now that i think of it, that seems likely. Will still wait on a move though, until we work that out. (Lots of links and redirects to sort out.) -- doofus-9 07:06, 17 February 2016 (UTC)

More examples of JJK's logos have been found in some of Osho's early books, which expand the range of the "flames and circles" theme, found respectively in Who Am I (pub 1968), Meditation: A New Dimension (1970) and The Gateless Gate (1971):

It is not known if these three were early logo versions before a final one was settled on. And it may be worth noting that they weren't just publisher's marks. Who Am I was published by Motilal Banarsidass, a non-"house" publisher which was and still is deeply supportive of Osho. And the JJK logo is sporting a Devanagari text version of their name, even on an English book. The text portion at least seems to have been dropped early. 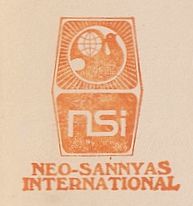 It can be seen in these three images that the number of circles was far from a fixed entity, with nine, ten, then back to nine. The inner flame also goes through some changes, piercing through the ninth circle in the middle image but retreating in the others, also varying in its waviness. The latter two images are taken from the publisher's info page inside the books; there are other interesting logo-like forms found there too, which may get expanded on eventually. These are: in Dimension, a highly stylized "signature"-like representation of "Rajneesh" which also appears on the cover (image upper right) and in Gateless, a kind of stamp representing "Neo-Sannyas International" (lower right). Both these images can be seen in their context in the book pages. It will be seen that the NSI "logo" is a poor quality image, almost like a rubber stamp, in fact not unlike the rubber stamp of Paras, the San Francisco center of the day also found on the Gateless page. That, and the impression stamp of "Marvin's library" also on the page suggest that the NSI stamp may be more a copy ownership statement than anything. Stay tuned. -- doofus-9 16:44, 20 March 2016 (UTC)

The second one, from the letters, was the same in both, but appearing with subtly different orientations, These differences on the letters and from the invoice logo, and the general crudity of the logo suggest rubber stamps. It is unknown whether Osho himself stamped the letter when he wrote it or officials at JJK stamped it sometime later.

To consider this, we have also: In the letter from 1967, the logo seems to appear twice, but the second is clearly on the envelope that the letter was sent in, with the image showing cancelled postage stamps and a rough outline of an envelope in the large blank space between the printed letterhead on top and the handwritten message way below. The logo stamp on the envelope and its difference from the invoice logo tilt the evidence toward Osho imo. -- doofus-9 20:53, 30 May 2017 (UTC)