Notes
(*1) Osho.com lists 3 audios for this series, but only two of them are available. No clue what event is for last audio.
(*2) Shailendra on completeness of the event (14.09.2020): "This audio (OW #1) starts to match with text from p.21 of ch.2 of the PDF. The first part of the chapter on pages 17-21 belongs to this event: in this case audio is incomplete. Because the subject matter is in continuity. The questioner asked in reference to what has been said by Osho before." This is intimate talk, i.e. private talk as in the Timeline, as it presents in Sambodhi Ke Kshan 2004 ed.
(*3) Text of the event is repeated twicely: ch.1, which seems unedited and incomplete in beginning, and as second part of ch.3, where text differs (is edited) from ch.1 version. Or vice versa: ch.1 is edited and second part of ch.3 is not??
(*4) It is #3 in Khajana collection.
(*5) About date/place see footnote (*6) of Talk:Sukh Aur Shanti (सुख और शांति).
(*6) Month in Oshoganga and Shailendra's PDF is incorrect due OCR error. Diacritic sign jumped on second letter: from "जून" (June) to "जनू" (Jan). "June" stated in 1980 ed. is correct as Osho was talking 3-6 June in Udaipur meanwhile Timeline doesn't have mentioning on 5 Jan for Udaipur or close places.
(*7) This audio is #7 in Khajana collection and from 12:20 there follows small English part from Early Talks ~ 01:

"Then you become totally independent. Independence one needs. Outwardly will be gained in any occupation. But an occupation like gardening or farming will do much good. Bodily, mentally and spiritually -- on all layers of life, it will be helpful."

It is in OshoWorld audio from 12:26. On Osho.com this audio are selling together with previous short audio of Upasana series.
(*8) Date and place are confirmed by tape label.

Two main issues to look at with this book. As often happens, understanding starts off fairly unclear. In the case of this book, input from a knowledgeable Hindi speaker has added undreamed-of subtlety to the first matter. Older writings that illuminate the process of dawning understanding have been preserved. Note that the title has been changed since the material just below was written

Renderings of the Title

Many are the mini-anomalies connected with this book. What may be the most unusual are not the transliterations -- though there are indeed some of them -- but the "literations," if you will, ie the varied renderings in Devanagari. The variety involves two of the words, "Us" and "Desh." At Diamond's own page for the book, they have as a text rendering, "कहा कहूं इस देश की," or to boil it down to the words in question, इस देश. This alongside their own cover image which has उस देस. This is an odd position, to gainsay your own cover image. What can be up with that?

Searching for the transliterated title does not yield any clues, since what you get are booksellers and audio sites who don't mess with the Devanagari. And searching for the varieties of Devanagari title brings few results, so some inferring needs to be applied. These are the results:

Desh is a common word in Hindi, meaning country or land, among other things. A further clue therefore can be found in looking in generic places, how is it rendered. In fact it turns out that देश is it, with very few results with देस, and those fairly random and chaotic, and the most common result on that side of the coin being देसी, or desi.

So it looks like Diamond has botched the cover but "corrected" it in their text version -- corrected ie aside from the bizarre इस replacing उस -- while osho.com has gone the route of making their text version consistent with the incorrect cover version and Printsasia has taken the middle path. I guess they want text searchers to find their page and Diamond and osho.com don't.

Turns out there's more than meets the ignorant Western eye in this. Shailendra explains:

Kaha Kahun Us Des Ki (कहा कहूं उस देस की): Des and देस are right in this title. In modern Hindi language, which is hardly one century old, देश (Desh) is the right word, but most Sants during the last 7 centuries spoke different local dialects according to their places of birth.
For example Kabir lived in Varanasi; he spoke Bhojpuri dialect. In most parts of Bihar, UP, UK, and even in Malaysia, no Indian can pronounce,SH (श) so it is replaced with S (स).
2 years ago, on a national TV, there was a documentary on Osho, in which the Bihari commentator kept saying "Oso" again and again. It was so irritating! Punjab, HR, Kashmir, and 50% of the Delhi population cannot pronounce a "half S", ie when joined with other consonants, such as in station / stop / school. They will say and write these words as satetion, satop and sakool, saying सटेशन for स्टेशन, सटॉप for स्टॉप and सकूल for स्कूल,
In the Bundelkhandi dialect of MP & UP, station becomes teshan स्टेशन ==> टेशन. Or my name and spelling changes from Shailendra to Selinder शैलेन्द्र ==> सेलिंदर. All these spellings are officially accepted. If I get a cheque/draft from a Punjab bank, with spelling Selinder, a Delhi bank will not reject it.
Same story with - Dariya Kahai Sabda Nirbana (दरिया कहै सब्द निरबाना), [ie the modern Hindi form of Shabd (शब्द) may be rendered more authentically according to dialect as Sabd (सब्द).]
Mostly Osho himself could not pronounce श, he said स in Hindi. A very famous singer Asha Bhonsale cannot pronounce her own name. Special songs are written for her in which श is avoided. Many Nepali people do just opposite -- they speak श in place of स.
There is a super hit song in which a Bihari singer is teaching music to his girlfriend from MP: Sawan ka mahina pawan kare sor (in the rainy month, the strong wind is making a loud sound). She sings SHOR, the correct Hindi. He insists this is wrong, "Say SOR". She makes this "mistake" again and again. 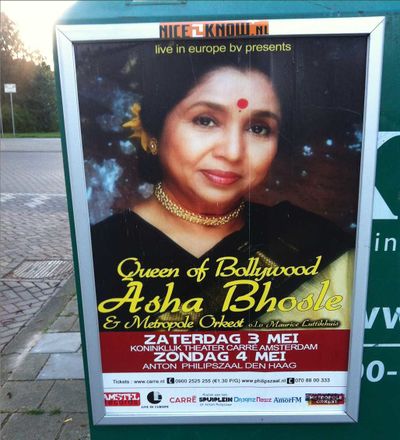 What an informative piece on the Hindi.

And may I add an illustration of the spelling for the famous Asha Bhosle, from right around the corner of my house.

It looks like everyone can be right here. Bhosle does appear to be how she is known everywhere in the Latin alphabet world. W'pedia notes that she "has been credited variously as Asha, Asha Bhosle, Asha Bhonsale, Asha Bhonsle, Asha Bhonsley, Asha Bhosale and Asha Bhosley". But when we go over to Devanagari, we find her in Hindi W'pedia as आशा भोंसले, which "should" transliterate to Asha Bhonsale. Nasalized "n"s and schwa "a"s are often omitted in everyday transliteration, so there ya go.

And discourses, how many, is it two or four? You might well arsk. And by the bye, how does Diamond manage to make 160 pages out of four discourses, never mind two? That second question will have to wait. The first is perhaps approachable by sifting through the info available. Most audio sites just have two, including Osho World's free download section. Intriguingly, OW has, in its commercial CD dept, found two more discourses, so they offer the four there. (Usually, if there's a difference, the free downloads will outnumber the paid ones.) Below are OW's four discourse titles:

Also regarding the number of discourses, in the fwiw dept, we have this from osho.com. Here it is they who are taking the middle path. Their audiobook offering goes like this:

Both two AND four! How about that! And they have outdone themselves by middle-pathing it in another way, breathtakingly and brilliantly simple and innocent. In the bumpf for the series, which i have taken for the Hindi book description on the main page, they declare unabashedly that there are THREE discourses. So there you have it. -- Sarlo (talk) 11:14, 9 July 2014 (PDT)

Small update: Just to make a liar out of me, osho.com has changed their presentation of this series in the following ways: The first short sentence in the bumpf about there being three discourses is gone, and they now present their tracks list like this: 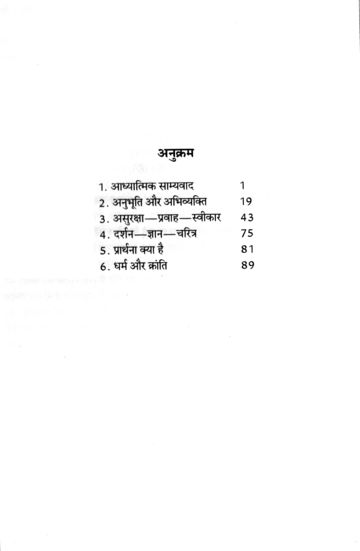 And the winner is ... at least according to the TOC in the 1990 edition ... Six: four PLUS two! Higher Math. And that TOC (click image right to enlarge):

It can be explained in this way: ch.1 and 3 of Kaha on Oshoganga are from one event, but differ incompleteness. Last part of that event was combined with another event (Upasana Ke Kshan ~ 01) and it will become ch.8 of Shiksha. That ch.8 was first published as Agyat Ke Nae Aayam (अज्ञात के नए आयाम).--DhyanAntar 14:40, 5 December 2020 (UTC)

Renderings of the Title, cont'd:

The 1980 Rajneesh Foundation edition was added on the basis of the recent publications list of Rahiman Dhaga Prem Ka (रहिमन धागा प्रेम का), published in July 1980. In that list, it was referred to as a "pocket edition".

And this new pubs list has turned out to be the final push to changing the last holdout bit of title, from "Desh" to "Des". Notwithstanding that "Des/देस" was and is archaic, uncommon and "incorrect", it is also in the end apparently what was intended. It is not an aberration of later editions but has been there since at least 1980. Not that there is a "tradition" that has to be upheld, but that archaic usage had something to convey, had a point to make. It is on more than one cover, Shailendra has argued the case, and it is in the new pubs list. So be it. -- doofus-9 08:21, 13 November 2017 (UTC)

Shailendra throw light on dates and places of this series:

In GoogleTranslate, this gives:

It seems above dates do not used in events and Timeline.