About the editions, no first edition of pure Pura Paya with nothing added has currently been found on the net. Here, for now, we have only the merged version(s). The Rebel edition, weighing in at 520 pages, is significantly longer than the Diamond one, a mere 380. One trusts that it is simply smaller print and not something more ghastly, like five chapters missing.

A transliteration note: Almost all sites use "Kahe" for the first word rather than "Kahai." The latter has been chosen here not just because it is correct – which it happens to be – but because search engines find Kahe when you're looking for Kahai, but not the reverse, thus Kahai is more inclusive.

Lastly, Gunge has been translated into English, as The Great Secret. Thus, technically, it is not entirely correct to place Pura Paya in the "untranslated" category. But since the rest has not been translated, it is correct enough. Thus spake Sarlo (talk) 10:46, 11 May 2014 (PDT)

There is no clear 20-chapter TOC available for this book. What follows is a piecing together of two items found on different sites. Osho.com had, as suggested above, the chapters from Gunge laid out as Part 1, while Osho World had ten chapters with different titles but location in the larger book unspecified. It is assumed for now that they fit together as below. 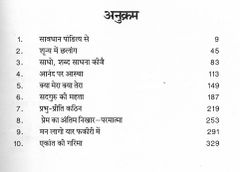 More recent research, plus scans in from a recent Diamond edition, still show a picture of mixed information. Diamond's ten-chapter TOC (image above right, top) at least confirms the accuracy of the first ten text titles above and make a decent case for the original Pura Paya's talks being those titles.

But then we have, from oshodarshan.com. an apparently different book with the same cover (image above right, bottom), hardcover published by OSHO Vision with 532 pages and offering all twenty talks of the combined Pura Paya and Gunge, titles not specified. And revisiting Osho World's audiobook section, they have these twenty titles for the combined offering, but CD-1 is the second ten and CD-2 the first. So not quite nailed down yet. We await developments. -- doofus-9 16:38, 18 August 2017 (UTC)