No traces of the Rajneesh Foundation's hard-copy book could be found on the net in the course of compiling info on this book, aside from the old version of the wiki's page for Kano Suni. Which was saved and reproduced but it is so sketchy that it may not be supportable. In that respect, it is similar to Dariya Kahe, but here at least there is an e-book, so there is hope. A mention of a later Diamond edition was found in a list of other books by Osho in the back of a 2004-5 edition of Dhyan-Sutra: Antim Yatra (ध्यान-सूत्र : अन्तिम यात्रा).
Note that paragraph above is largely obsolete with the scans of the 1978 edition from Shailendra.
Another source for existing of Diamod edition is the list "Hindi-Diamond" from Shailendra. So i will add a lay-out for that.--DhyanAntar 15:44, 16 November 2018 (UTC) 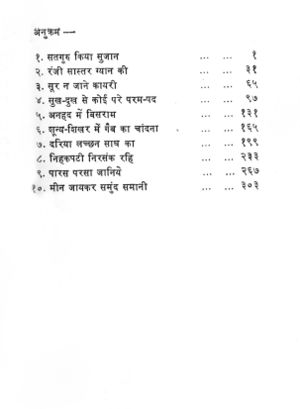 With the comparison now duly done, we have found:

a) some very small differences: a different way of rendering ज्ञान (gyan / ग्यान) in ch 2, hyphens in ch 4 & 6, + a different style in the last word (jaaniye / जानिये vs jaanie / जानिए) in ch 9.
b) likely errors in ch 8 and 9, presumed to arise from my faulty transcription from the e-book. Those presumed errors have been updated to reflect the 1978 contents scan (image above right). The jaaniye-vs-jaanie difference may also be an error but has been left since similar differences in other words are tolerated.