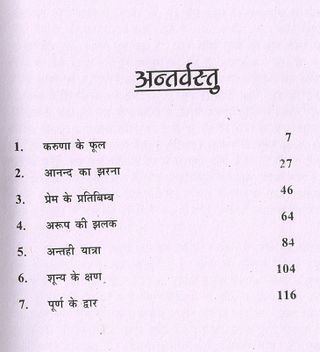 The theme of the book apparently is that compassion and revolution do not mix well. About the location of talks, that it is both Mumbai and Meditation Camp is unlikely but not impossible, so one may have to choose. -- Sarlo (talk) 10:26, 12 June 2014 (PDT)

The source of the text-TOC above is unknown but it matches well with Diamond's 2012 TOC. The one exception is the first word of ch 5, which is similar enough to not worry about different meanings and whatnot. What this TOC fails to do is give the slightest confirmation of Diamond's intriguing assertion that Shiksha Mein Kranti (शिक्षा में क्रांति) is in some way an antecedent work to this collection. There are precisely zero correspondences between the titles of this small tome and any of Shiksha's titles. Titles could have changed while the material has been retained, sure, but for now that possibility can go on the back burner.

I asked Shailendra and he said he "checked it minutely. Not a single chapter of Karuna Aur Kranti is taken from Shiksha Mein Kranti. करूणा और क्रांति has nothing to do with education. Publisher made a mistake in printing the source title". -- doofus-9 07:00, 6 September 2017 (UTC)

A couple of other small matters: we can assume that there were not two sets of compilers, editors etc working on this small book, as the pub info suggests, so one set is likely wrong. 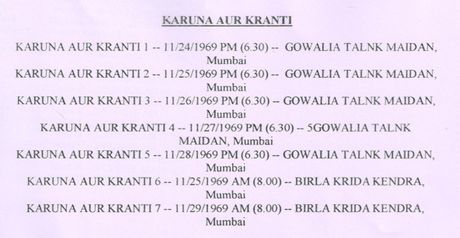 Dates and Places info has come from Jagdish, image right and text version below. Note that the discourses are not entirely in chronological order. If they were put in chrono order, they would be the same as Shailendra's e-book mentioned above.

And venues will be understood to confirm that this is not a meditation camp in the usual sense. It is not a "retreat" at an isolated exotic location with an all-day focus on meditation, with attendees committed to a days-long process, no no. Attendees could be screened and charged at Birla Kreeda but not at an urban open field. So no need to entertain that possibility any more. -- doofus-9 08:20, 30 January 2019 (UTC)

Note that this concern about a camp relates to words no longer in the article page, that the talks for K&K are "said variously to have been given in Mumbai and at a meditation camp". These words were deleted when it became clear that there could not have been a camp.

But views change or evolve . . . clear today, murky tomorrow . . . In the 1969 Timeline, before any events relating to K&K have been entered, we find on Nov 25 not just one more event but two, and both at Birla Kreeda no less, reproduced here:

And the Camp link leads to a bona fide event there: "Floating and Dying Meditation (Bahana aur Mritana), introduced in Dwarka camp [end of October], given final form in Chowpatti, Mumbai, at the Birla Kreeda Kendra".

So this is likely where the idea of the talks for K&K having been given at a camp has arisen. But it looks safe to say that this was a separate event, just the same day and place. So will throw the K&K discourses in the Timeline with them, all one big happy family. -- doofus-9 07:25, 1 February 2019 (UTC)

The 1975 pub date is not explicit, but the copyright date is 1975 and that is likely good enough. Then we have the back cover, which lists five books as "New Publications" which are also on another list, the back cover of a book published in 1977. This second list purports to be of the publications of Om Rajneesh Dhyan Kendra Prakashan, Bombay but includes these five titles from Sagardeep. Whether these two centers were co-existing and co-operating or Om was Sagardeep's successor or there was some other relationship story remains to be seen.