As it says on the front page, Jainism is the religion Osho was born into. Of course he rebelled against it, and criticizes it and Mahaveer when it suits his purpose, but it remains close to his heart. His first published discourse, in 1955, is about a Jain saint, Taran Taran. His first dedicated series about a particular Indian mystic is Mahaveer: Meri Drishti Mein (महावीर : मेरी दृष्टि में) (Mahaveer in My Vision). And his first enthusiasts and lovers are Jains. And long after they withdrew their sponsorship of his talks after Sambhog Se Samadhi Ki Or (संभोग से समाधि की ओर), they continue to be interested in him and value anything he says about Mahaveer. Thus it came to be that a Jain org has preserved this obscure book.

Above info was in a pdf image format which could not be rendered directly as text, so i have done it this way as an interim step before converting back to Devanagari text. (May stay this way for a while.) There are undoubtedly errors, especially in the underlined portions, so feedback is welcome.

Most of the chapter titles have been got from the text itself, which, though it has errors and unclarities, pieces of letters missing etc, is in much better shape than the separately offered TOC, which is unreadable in many places. However, the title page of the 1st chapter of the third section (p221) is just missing, but is fortuitously saved by a more or less legible title in the TOC.

And about the second section of the book, "Dvitiya Khand," its five short chapters have titles identical to the first five chapters of Jyon Ki Tyon. Thus, there may be some more focused and wholesale compiling there than the rest of it. -- Sarlo (talk) 19:13, 28 July 2014 (PDT) 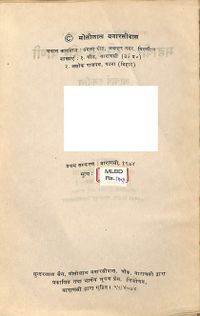