"Naye" is an unusual word in that it is more consistent in Roman characters than Devanagari, though of course not entirely consistent. Thus here, since there is no cover image to compare with, we are left to wonder, is it नये or नए? Both are used, with different search results. In the end went with नये to be consistent with its "sister" publication, Naye Bharat Ki Khoj (नये भारत की खोज).

These discourses may have achieved publication as a component of Shiksha Mein Kranti (शिक्षा में क्रांति), ie that book HAS been published but it is not confirmed, only unreliably reported that Naye Bharat is a part of it. FWIW, a comparison of chapter titles between the below and Shiksha's TOC shows no correspondences whatsoever, so that possibility will have to remain so far unconfirmed. -- doofus-9 (talk) 10:12, 25 November 2014 (PST)

Some Dates and Places info is in from Jagdish but it is unfortunately truncated, going only as far as ch 9. Still, it is a great leap forward in learning about the circumstances of this series, which appears to be not so much a series as a gathering together of similarly-themed talks. 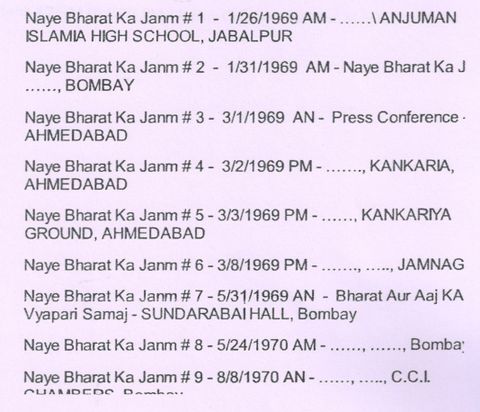 A few notes: There may or may not be a subtle difference between the venue(s) of talks #4 and 5. Kankaria is an artificial lake in downtown Ahmedabad, . It is unusual to see this ending "-ia" in Indian transliteration but this lake is fairly consistently done so. The "Ground" or fields next to it are less consistent and may sometimes use -"iya". If it matters.

"Jamnagar" was truncated in the image but looks like a reasonable guess.

And the possibly truncated material between the date and clear venue for talk #7 appears not to be part of the discourse title, more a theme or description of the event, something like "India and today's something", given to the "business community". -- doofus-9 18:29, 1 February 2019 (UTC)

Naye Bharat Ka Janm ~ 07: date has been corrected from afternoon to morning. According to the source Osho's Appointment Diary 1967-1970 (translated source document) discourses were held in mornings and evenings, while afternoons were for Q & A sessions (private talks).--DhyanAntar 03:18, 27 September 2022 (UTC)