(Note: this is what clearly missing in our collection, where easly to identify what missing. But Osho wrote many writings, so this list should be much more.)

was Osho ambidextrous ? Neeten claims that he was and that Osho spent most of his life writing with his left hand. this image shows him writing with his right hand.--Rudra (talk) 08:25, 21 November 2015 (UTC)

Neeten has his sources of course. Osho's cousin Arvind testifies to his writing left-handed, and we have Osho himself, in Glimpses of a Golden Childhood :

You will be surprised to know that when I started writing, being such a nuisance, I started writing with my left hand. Of course everybody was against me; again, of course, except my Nani. She was the only one who said, "If he wants to write with his left hand what is wrong with it?" She went on, "The question is to write. Why are you all so concerned which hand he uses? He can hold the pen in his left hand, and you can hold the pen in your right hand. What is the problem?"
But nobody would allow me to use my left hand, and she could not be everywhere with me. In school, every teacher and every student was against me using my left hand. Right is right, and left is wrong; even now I cannot understand why. Why should the left side of the body be denied and kept imprisoned? And do you know that ten percent of people would love to write with their left hand; in fact they had started writing like that but were stopped.
It is one of the most ancient calamities that has happened to man, that half of his being is not even available to him. A strange kind of man we have created! It is like a bullock cart with only one wheel: the other wheel is there but kept invisible; used, but only in an underground way. It is ugly. I resisted from the very beginning.
I asked the teacher and the headmaster, "Show me the reason why I should write with my right hand."
They just shrugged their shoulders. I then said, "Your shrugging will not help, you have to answer me. You would not accept me if I shrugged my shoulders; then why should I accept you? I don't take any notice of it. Please explain properly."
I was sent to the school board because the teachers would not understand me, or explain to me. In fact they understood me perfectly. What I was saying was plain: "What was wrong in writing with the left hand? And if I write the right answer with my left hand, can that answer be wrong -- just because it has been written with the left hand?"
They said, "You are crazy and you will drive everybody else crazy. It is better that you go to see the school board."
The board was the municipal committee which directed all the schools. In the town there were four primary schools and two high schools, one for girls and one for boys. What a town -- where boys and girls are kept so absolutely apart. It was this board that made decisions about almost everything, so naturally I was sent there.
The board members listened to me very seriously, as if I were a murderer and they were sitting like judges, to hang me. I said to them, "Don't be so serious, relax. Just tell me what is wrong if I write with my left hand?"
They looked at each other. I then said, "That won't help. You have to answer me, and I am not easy to deal with. You will have to give it in writing because I don't trust you. The way you are looking at each other appears so cunning and political that it is better to have your answer in writing. Write what is wrong in writing a right answer with the left hand."
They sat there almost like statues. Nobody even tried to say anything to me. Nobody was ready to write either, they simply said, "We will have to consider it."
I said, "Consider. I am standing here. Who is preventing you from considering in front of me? Is it something private like a love affair? And you are all respected citizens: at least six people should not be in a love affair -- that would be like group sex."
They shouted at me, "Shut up! Don't use such words!"
I said, "I have to use such words just to provoke you, otherwise you would just sit there like statues. At least now you have moved and said something. Now, consider, and I will help you, and not hinder you at all."
They said, "Please go out. We cannot consider it in front of you; you are bound to interfere. We know about you, and so does everybody else in the town. If you don't leave then we will leave."
I said, "You can leave first, that is gentlemanly."
They had to leave their own committee room before me. The decision came the next day. The decision was simply that "The teachers were right, and everybody should write with their right hand."
This phoniness is dominant everywhere. I cannot even comprehend what kind of stupidity it is. And these are the people who are in power! The rightists! They are powerful, the male chauvinists are powerful. The poets are not powerful, nor the musicians....

Note to those who wish to transcribe the manuscripts: If even the enhanced images are difficult to read, convert them to greyscale and and adjust the black&white levels. 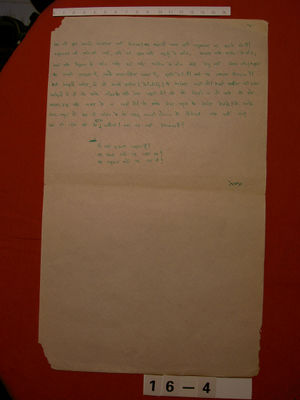 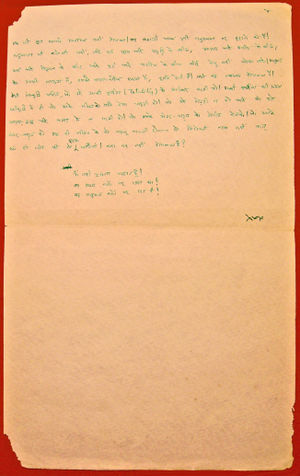 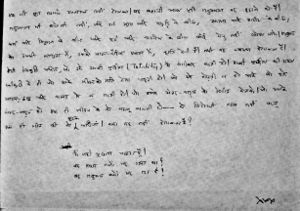 For published manuscripts Hindi text, which used as transcript, are taken from published books, so now text of transcripts and images differ: paragraphs, exclamation and questions marks, missing and replaced words, etc.

The related issue is images of manuscripts somewhere have damaged and unreadable text, but typed text are taken from published books.--DhyanAntar 10:53, 24 January 2019 (UTC)