This is a summary of our present knowledge of the basic facts about this book, according to a decent consensus of sources.

These 6 discourses are from one meditation camp in Poona, Oct 17 - 20, 1970. Information has been gathered here, as both Sun of Consciousness and Nine Sutras mention this book as their original Hindi. But later it has been found that in fact Chetna Ka Surya was the first edition of these discourses.

About titles: It is said at the page for the translation, Nine Sutras, that the translation was called Sun of Consciousness in the CD-ROM, but was never published under that title. There is an interesting correlation in the Hindi titles, which turned up in Shailendra - Osho's Hindi books (source document). Shailendra says that Yog: Naye Aayam was also called Chetna Ka Surya, which literally means Sun of Consciousness.

It is not known how much currency this alt-title ever had, and whether it was once published under that name. At this point, we are in fwiw-land. Continuing in that vein, we can also consider the individual discourse titles. Rough translations of the Hindi chapters above are as follows:

Only three of the chapters of Sun of Consciousness in the CD-ROM have any titles but they correspond closely to three of these but in a different sequence. They are:

2. The Universe - A Family
3. Home-Temple
6. The Sutra of Ultimate Life

The notion of a different sequence is also explored in the article page for Nine Sutras, where it reports on the Osho Friends International site's exploration of altered text for this book and says, "On the CD, the order of the chapters is chronological. In the 2005 edition, the order of the chapters is different: 5-1-2-3-6-4. In the 2006 edition the order is again chronological. The texts of the 2005 and 2006 editions are the same though."

Looking at OFI's exploration today i found the order to be 2-3-4-6-1-5. We may be using different terms of reference so for now we can just note that another interesting fact about all this is that the 2003 Rebel edition of Yog: Naye Aayam also seems to use this order. At least according to the chapter titles above, the order is 2-3-x-6-y-z (relative to the chrono order of the CD-ROM). Additionally, we have some English chapter titles from OFI. Two of the three missing titles -- the 3rd and 5th -- in the CD-ROM are completely new and not relevant to this discussion but Nine Sutra's 6th chapter is called The New Sannyasin -- possibly with a new OIF spin on that -- which corresponds well with ch 6 in the 2003 YNA. Thus, this change of order clearly started earlier and the 2005 edition likely derives from it or some unknown predecessor. Two English editions in two years (2005 and 2006) suggests the 2005 may have been understood as mistaken. -- doofus-9 20:25, 14 February 2017 (UTC)

Osho Books on CD-ROM says that Sun of Consciousness is "a translation from the Hindi Neo-Yoga Sutras". Russian translation Solnce soznanija. Glinjanye lampy (Солнце сознания. Глиняные лампы) also states on Neo-yoga Sutras (in Hindi original!) as the source for translation from English. Perhaps we should create this new page as a redirect and make the link in the articles?--DhyanAntar 13:24, 15 April 2017 (UTC)

Good find! But my impression is that there is not a lot of substance to this. The CD-ROM is not infallible and is likely the only source for this, the Russian translation's source being likely that same CD-ROM. IMO they probably just made it up, based on talk about the project. There are decent reasons to believe this:

1. No other sources have been found.
2. Since the translation and prep for "Sun of Consciousness" were in progress while the CD-ROM was also being put together, there could easily have been no actual book to refer to but just the papers they were working with, which would have been subject to change, exactly as "Sun of Consciousness" itself did not survive.
3. The words in this purported title "Neo-Yoga Sutras" are not actually Hindi or Sanskrit, besides Yoga. "Neo-" is a Latin prefix just meaning new, as in "neo-sannyas" (the Hindi version of that being (transliterated) "nav-sannyas"). And "Sutras" is not a Hindi plural form, it is an English pluralization of "sutra". The Hindi plural form could be sutron, sutren or sutre, depending on circumstances.
4. I would wager that the "Hindi original" form touted by the Russian translators was just a transliteration into the Hindi script Devanagari, possibly even erroneous. Could you make an image of that? -- doofus-9 05:05, 16 April 2017 (UTC)

You want the image of Colophon of this book, did I understand right? Here you are :-) 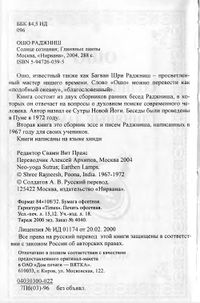 I want to note that the most likely Veet Prayas uses CD as source for their translations. I can't be completely sure in that. I must to add that Sw Veet Prayas use not only CD, because some books have parts of text which CD is incomplete text.

Is it worth it for me to take information from CD to put it to notes on the Wiki, if it can be unreliable and I have no way to test it? Notes to chapters of books on CD have a lot of information. Today I did this, look at here, please.--DhyanAntar 08:09, 16 April 2017 (UTC)

Okay, that's great. I had thought that, by "Hindi original" you meant something in Devanagari. I don't see that there, only "Neo-yoga Sutras" in Latin alphabet, which doesn't prove anything one way or another but suggests at least that this is probably not an independent source, since we know Prayas worked so much from the CD. Therefore, there is likely only one source, the CD. Which also doesn't prove anything, but when considering a new title not seen anywhere else, when there are already lots of titles around, one can at least be a little suspicious. Then, if we find reasons to be suspicious, we celebrate Suspicion, and call it being intelligent.

In general, it is good to treat the CD-ROM as a reliable source. It is one of the best. But no source is infallible. So if it flies in the face of common sense or other "reliable" sources, then a grain of salt <<== English metaphor alert!!

All right. Thanks a lot. wait what else will reveal to us the time!

Only a thing I did lost to add that Солнце сознания, from the name of Russian translation book Solnce soznanija. Glinjanye lampy (Солнце сознания. Глиняные лампы), is the translation of the phrase Sun of Consciousness.

I'm glad I decided to switch from work of the English list Osho on Russian section. There are little details and discoveries, sometimes things are supplemented and edited and there are small typos that are especially difficult to find. --DhyanAntar 17:24, 16 April 2017 (UTC)

CD-ROM has three inconsistencies in the time of 3rd, 4th and 6th discourses. This is what it says:

I propose to follow the date/time, and not the ArchiveCode. The 0 in ArchiveCode is a kind of default/unknown, so less certain than that explicit pm. This is also as it has been proposed in the timeline. --Sugit (talk) 16:32, 11 February 2018 (UTC)

Perhaps, Chetna Ka Surya published earlier. So it should be First book and the events should called by its names. I asked Shailendra about it. He confirmed that Chetna published earlier than Yog Naye Aayam. I am going to change event names. Ok?--DhyanAntar 12:34, 18 February 2019 (UTC)