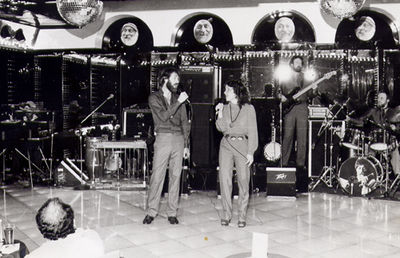 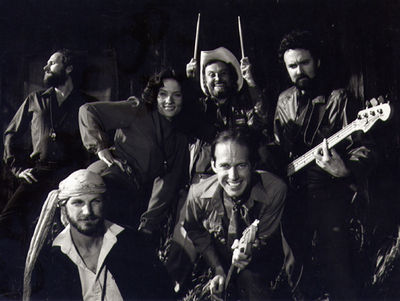 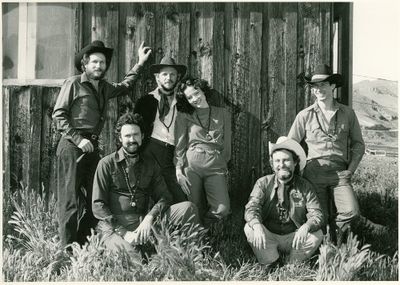 Photo of many Ranch musicians playing at the head of Osho’s drive-by through the main street of Rajneeshpuram. Deva in cowboy hat playing the acoustic guitar.

They performed at the Ranch and at Zorba's nightclub in Portland. Here is their story:

My daughter Gyana and I arrived at the Ranch from Gitam when there were just 30 or 40 people there. We were still cooking meals in the original ranch house in what was to become Jesus Grove which was so small we all had to eat out in the yard even in raging snow storms.

Everything was about building then, and creating enough infrastructure – housing, radios and phones, power, plumbing, roads, etc., - to take care of the huge influx of Sannyasins who were being invited to come to live there with Osho and to visit during Celebrations. I had been a Handyman for Deeksha and then run the typewriter and office equipment repair department in Pune and so I was given the job of keeping all the equipment we were using on the ranch running. My Temple was called Gora and eventually I was given a trailer on the muddy main street and a few helpers. I also had a car (a white Dodge Ram Charger) since I was designing and installing the Motorola radio system and then the telephone system. So, I was called Mr. Motorola and had a lot of freedom even though I didn’t have much time for anything other than work.

I had been a guitar player all my life. I had first gone to Poona in 1975 but had not played there much because of my other work and when we came back to America, the music I’d missed most was country/western music (I’m from Arizona) so I had picked up a pedal steel guitar along the way and dragged it to the ranch. I had it set up in a corner of the Gora trailer and late at night, when I was alone, I’d practice.
Someone told me about a guy working on a construction crew who used to sit on the porch of his trailer at night and play banjo which sounded great so I got in touch with him. It was Sw Anand Milarepa. Mili started coming over after work and playing with me and soon he brought Ma Prem Gulabo along to sing. Not long after that, we invited Sw Bodhi, who I’d lived with on Boat Club Road in Poona, to play drums and we had a band. (I don't know Bodhi's full sannyas name but his real name is Richard Heartman and he lives, at lease, last I heard, in Albuquerque.) We all liked country music and since we had no idea it would go anywhere else, that’s what we played.
We were just jamming at night in the trailer but soon had enough repertoire that we wanted to play for our friends. Magdalena had just been completed and we’d all started eating dinner there so we set up our equipment at one end of the room and just let it stay there so we could practice and play for everyone after we were done eating. This went on for a while until one day Ma Anand Sheela came by to listen. Not long after that, she came by again with Ma Prem Arup and told us,

“We need a band. I just bought a nightclub in Portland and we need a live band to play there. You’re it. Start practicing.”

Sheela gave us cowboy hats and me a pair of cowboy boots (the best for pedal steel). So, that was the beginning of the The Rajneesh Country Band.

There wasn’t much other music on the Ranch yet and for a while, in the beginning, we were allowed to make the band our full-time Worship. Sw. Prem Geet came along to play bass and we worked up a lot of songs with Mili and Gulabo doing great vocal duos. Mili played a black Fender Strat, I played a gold Gibson Les Paul, mandolin and of course, pedal steel.

Sheela also gave us an old school bus and we drove back and forth to Portland to play at the Zorba The Buddha Nightclub there and eventually started staying over a few nights a week at the Rajneesh Hotel. The RCB was so good Sheela started loaning us out to Oregon politicos she liked and we did a couple of private gigs for them. Eventually Sheela realized we were having way too much fun so she demanded that we work our regular jobs as well as be in the band. Luckily we had most of our repertoire already down so we’d work 10-12 hour days outside in the middle of winter and then load the bus and drive to Portland and play until 2:00 or 3:00 in the morning and then pass out in the hotel. But we still had so much energy from the music that sometimes I’d just take walks all over Portland after the gig until the sun came up to burn it off.

In the next couple of years different people played in the RCB, Ma Suresha sang some as did Sitaro, Sw. Laleet became our bass player for quite a while, Sw. Buddha came on to play an awesome honky-tonk keyboards. (Laleet is Mick Pulver and last I heard he lived in San Rafael, CA but it was a long time ago. Buddha's name is Terry Pellegrin and he lives in Portland, OR.) Sometime into the 2nd or 3rd year I had a massive nervous breakdown (not band-related) which ended my Ranch music career. Sw. Govinddas took over as lead guitar player in the band. By this time, there was much more music around the Ranch and the Celebrations were huge so there was now a Rock Band, Jazz Band and lots of Satsang music in the new Buddha Hall.

We played for a Celebration Satsang once to a full Buddha Hall where I took a pedal steel solo (it’s on some record, somewhere) and I always wondered what Osho thought about that country/western sound.
No comment! 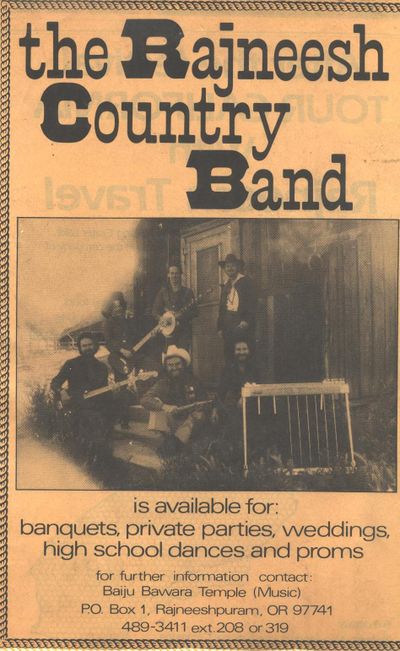 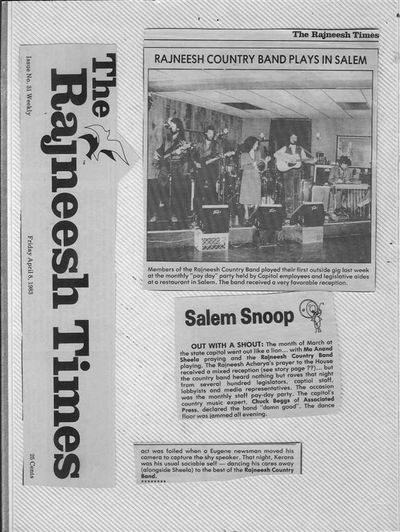 Advertisement Sheela put out to rent The Rajneesh Country Band.