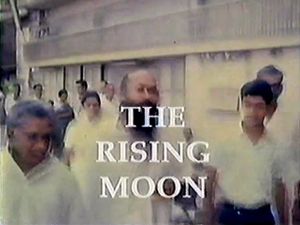 Unique three-minutes film footage kept by Nikalank was sent to Oregon later on, but like other documentary material they seem to have vanished following the closure of the Ranch in 1985. Some preserved footage from early meditation camps where Acharya Rajneesh is leading the meditations is included in the video "The Rising Moon" covering the period 1968-1975 (Osho Verlag), and the first film recording of a lecture is from Cross Maidan in Bombay April 1970:

“For the first time, Osho’s programs, ‘Beware of Socialism’ meetings and active meditations at Palm Beach, were filmed in a 16 mm reel. After that, Osho’s Nargol meditation camp and his journey from Mumbai to Pune were also filmed in a 16 mm reel. There were total four reels. One reel was lost afterwards from that, and three reels were copied into video cassettes and later in CDs. Later on, it was discovered that Ma Madhu’s husband had destroyed the reel which was lost, in Ajol (Gujarat).” (Laheru 2012, p. 50)

It should be noted that there are several versions in circulation. The original historic footage has been placed between more recent footage of discourses, some as late as 1988. Depending on the version, the credits are different and the music, that has been placed over the original silent footage is different as well.
Additionally, all of the historical footage of the film was later used in the documentary Osho 1931 - 1990 (1996), among many others.

In 1988, while I was part of the video team at the Osho commune, I heard about some 16mm footage from the early days of Osho that was stored in the Osho archive in Zurich. I worried about the deterioration of the 16mm film, I volunteered to start a project to rescue this film material and transfer it onto 1-inch video tape. The project got a green light from the higher-ups, and I flew out to Zurich.
I met the foundation lawyer and we entered the archive. We found three 16mm reels (*). I flew to Amsterdam and transferred the reels onto 1-inch video tape, then flew the tape back to India. After reviewing the footage, I suggested that we assemble all of this material into a new short film. I edited this material together and added Osho quotes and a contemporary Osho soundtrack in a Mumbai studio. This took a few trips from Pune to Mumbai by train. Then I sent it to Osho, and he apparently liked it, suggesting the title The Rising Moon.
For a few years, this film circulated around the sannyasin community, and the Netflix documentary Wild Wild Country (2018) used some footage in episode 01.
(*) Further research shows that originally there were four 16mm film reels, but one was lost. One professional cameraman, Jhaver, filmed Osho leaving Mumbai on his way to Pune on March 21st, 1974. The other footage of Mount Abu, Nargol, etc. was filmed by other paid professionals.

NOTE
The credits shown here are from the most recent version we have seen (1988).

In Loving Gratitude to Bhagwan

Also on Archive.org and on veoh.com