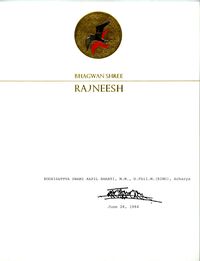 Kapil and his wife Kusum were Osho's hosts a couple of times when he came to Ludhiana. Osho wrote many letters to them, including a whole book's worth, Prem Ke Swar (प्रेम के स्वर). On the right are a couple of name-papers, an "ordinary" sannyas name-paper from 1976 and a "Bodhisattva" name-paper from the Ranch.

In his "day job", Kapil was an owner of Kwality Ice Cream, an inexpensive ice cream distributed widely across India. He and Kusum moved to Amritsar after the Hindu chauvinist disturbance in Ludhiana (link below). Kapil left his body in 1996.

see also
Ma Kusum Bharti
Sw Asang Bharti
Osho News, a story from Manali, after the collapse of the Ranch
Naye Samaj Ki Khoj ~ 10, a story about a disturbance created by Hindu chauvinists in Ludhiana, which led to Osho cancelling many public talks
Letters to Kusum and Kapil