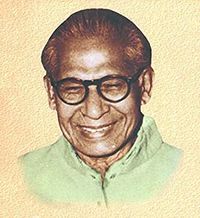 with his wife Teji Bachchan 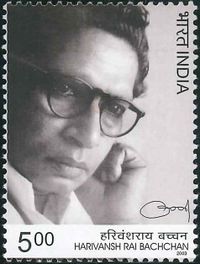 Bachchan was born in the village of Babupatti, in Pratapgarh district, near Agra, in British India on Nov 27 1907. He was a major poet of the Nayi Kavita (New Poetry) literary movement of early 20th century Hindi literature. He is best known for his early work Madhushala (मधुशाला). His family includes his wife, social activist Teji Bachchan, son, Bollywood actor Amitabh Bachchan and grandson, also Bollywood actor Abhishek Bachchan.

From 1941 to 1957, he taught English Literature at Allahabad University and then went to Cambridge for a PhD. He began using the pen name "Bachchan" (meaning child) instead of Shrivastava when he wrote his poetry. After returning to India, he resumed teaching at Allahabad, also working at All India Radio there.

In 1976, he was awarded the Padma Bhushan for his contributions to Hindi literature.

He met Osho in 1969 in Delhi and presented him with a copy of Madhushala. Osho had actually read this book years earlier, borrowed from the Gadarwara Public Library. When Osho had to leave to go to his train, Ageh Bharti reports, in Osho News:

Bachchanji said, "You are a tragic person and you shall be crucified." His eyes welled up with tears and I also wept at the same time. Osho put one hand on my shoulder to console me and told Bachchanji after a pause, "You are right." A deep silence enveloped us for a moment.

Osho wrote him a letter, which was published in Prem Ke Phool (प्रेम के फूल) as letter #35. In this same ON article, Ageh offers a translation of this letter:

My beloved one,
Love.
Where does it happen that two persons meet?
At least on this earth, it does not happen, isn’t it?
Dialogue seems to be impossible here.
But sometimes the impossible also happens.
That day, this is what happened.
Having met you,
I felt that meeting could also happen,
And dialogue too,
And even without words.
And your tears gave the answers.
I am very grateful for those tears.
Such resonance happens only once in a while.
I have gone through 'Madhushala'.
Again and again I have gone through it.
If I could sing,
Then what I would have sung is what is sung in it.
Only such a sannyas
that can accept the world also happily,
I call sannyas.
Aren’t really the world and 'moksha' one and the same?
In ignorance, there is duality.
In knowing, there is but only one!
Ah! Is that worth calling a religion
That cannot sing the song of love
And cannot dance in joy?

P.S.
Shiv [(Ageh)] says that you are to come over here.
Do come soon.
Time has no certainty.
See, the morning has happened,
The sun has arisen,
And now it is not very long that it will set!