From The Sannyas Wiki
(Redirected from Jeevan Jagriti Kendra)
Jump to: navigation, search

JJK logo found on an invoice 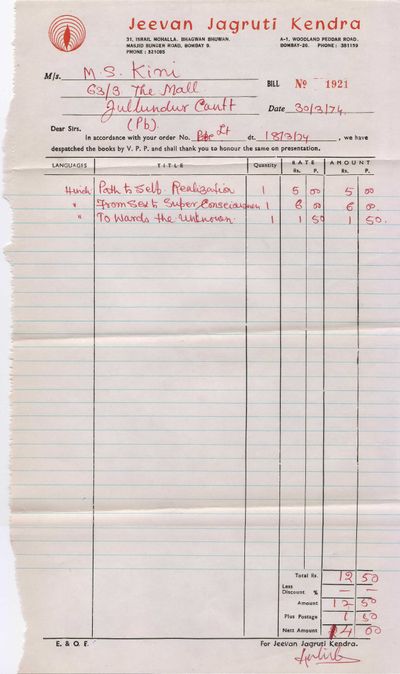 Jeevan Jagruti Kendra invoice, 30/3/74, together with a blue carbon copy. Found in a copy of Path to Self Realisation at Theosofische Vereniging in Nederland. 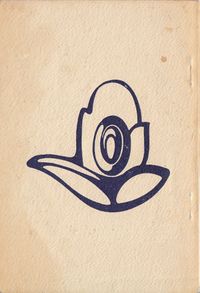 Jivan Jagruti Kendra was a trust, set up Jun 11, 1969. Osho was an "Advisor for life" who also appointed some board members. (see ref 1)

JJK was the main publisher of Osho books in the Bombay period (before March 1974).

Jeevan Jagruti Kendra (sometimes called Jeevan Jagruti Andolan, or Life Awakening Movement) was the first larger-scale organization to spread Osho's words and meditations. It had two main centers of operation, in Jabalpur and Bombay (Mumbai), plus many others scattered around India. The smaller centers were an informal network of friends who managed places for Osho's meditations and occasionally promoted events when he would come to their towns in his traveling days. The two larger centers did this plus were responsible for his growing publication needs. And as the group in Bombay was wealthier and in a much larger market and a major center where Western seekers passed through, it came to be the predominant branch, well before Osho moved there in 1970.

There is much that is not known about the logo(s) and when each form was used. Osho himself is said (in this Osho News article) to have designed the first version, likely one similar to the lower one on the right. The symbolism is also a matter for some speculation.

The seven circles in the top logo could be thought of as the seven "bodies", the physical, astral and so on, with the red wavy squiggle a representation of the kundalini serpent at the base of the spine about to uncoil and rise. But then we run into the version on the invoice, which has nine circles. In that one at least, the darker form at the center easily suggests a candle flame, which the more sinuous and stylized form in the first logo could well be too. So the flame at the center that lights our way through all the different levels can be as good a guess as any for now. And the flame is life energy (Jeevan).

Because the two "logos" are quite different in significant respects -- and others like the second one have been found, see the Discussion page -- it is evident that their "logoness" does not depend on their being fixed images. More likely they are symbols based on an underlying, unifying concept that can find different expression, or simply evolve. More on this in the discussion page.

Many people passed through the core group of JJK and contributed significantly to the expansion of Osho's work. Laherubhai's memoir, Blessed Moments with Osho has a fair bit about them and their ways of working with Osho. The wiki has excerpted a whole small chapter dealing with this theme starting in 1962, at Jeevan Jagruti Kendra People in Mumbai. Here are a few names of the main players in Mumbai: Harshadbhai, Ishwarbhai Shah, Anopchandbhai, Rishabhdasji Ranka, Chimanbhai Chakubhai, Jatubhai Mehta, Tarachand Kothari, Gulabchand T Sheth, Durlabhjibhai K Khetani, Ramanbhai C Shah, Himmatbhai Joshi, Premchandbhai Maheshwari and Vasanjibhai Lodhaya are among those he mentions from the early days. Then of course Ma Yoga Laxmi, Ma Dharm Jyoti, Ma Yoga Taru and Sw Yoga Chinmaya came, along with a whole new contingent from the West.

ISBN numbers
JJK did not use ISBNs.