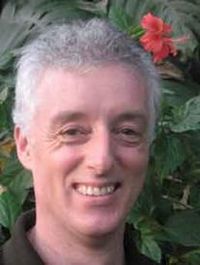 Samudroprem was previously known as Sarovara from 1983-2013 and as Swami Phil from 1980 to 1983 . He was born in England in 1960, his spiritual search began in teenage years, at age 15 he received initiation into Tibetan Buddhism by Dilgo Khyentse Rinpoche, at 19 he came across the books and meditations of Osho, as soon as he could he went to India to become a disciple of Osho on 13th April 1980. From 1980 Samudro lived in Osho’s communes in England, Germany, India and USA. In 1985 he was selected to train as a therapist in a scholarship program at Osho International Meditation University, Oregon.

After the Counsellor Training he continued to train in a broad range of therapies, including Star Sapphire Energywork, Intuition and Esoteric Science, Reliving Past Lives, OSHO Meditative Therapies, Psychic Massage and in the Aura-Soma Colour-Care-System® he is an Advanced Level 3 and Personal Presenters Course Teacher. He has trained in Family Constellation with Bert Hellinger. For several years in Pune II he was Assistant Director of Centre for Transformation, Medtation Academy & School for Centring faculties of Osho Multiversity as well as being a resident group and meditation leader.

Samudroprem holds a Professional Diploma in Counselling from Oxford College, UK. He has studied BSc Psychology at The Open University.

He has been travelling internationally since 1987 to guide seekers through Osho therapy and meditation seminars.