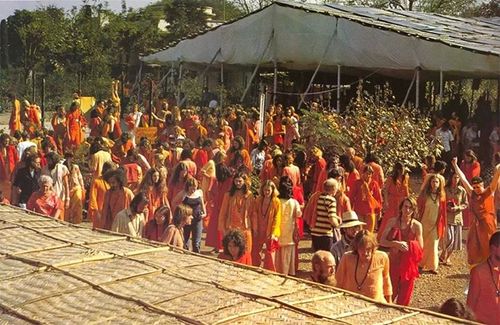 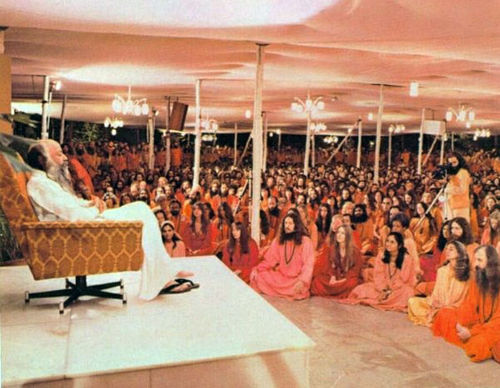 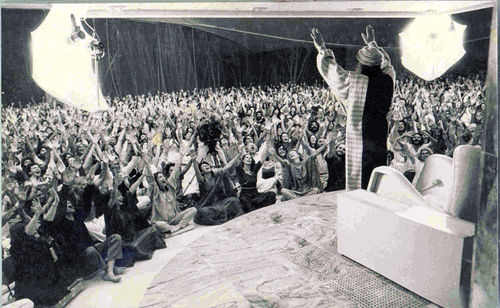 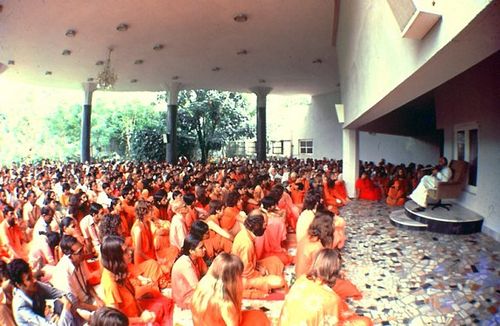 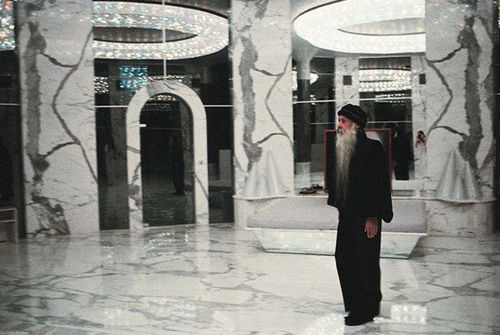 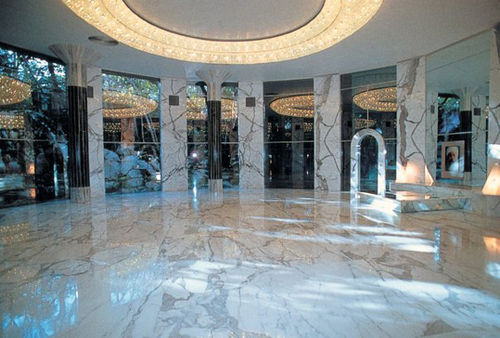 Late 1976 - a diagram of ashram facilities of the era 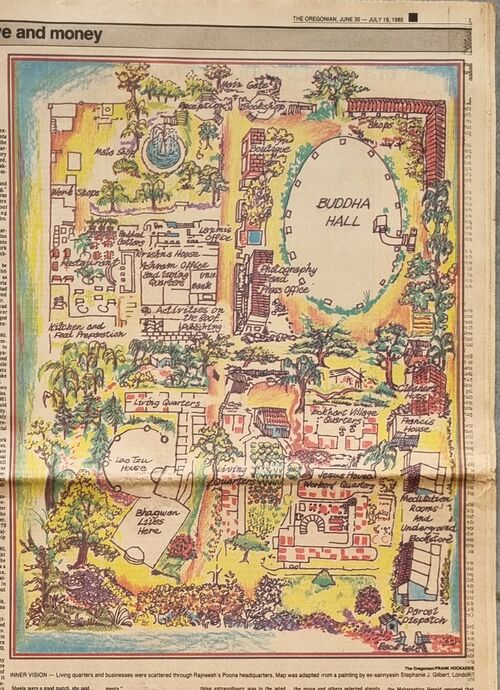 For most visitors to the wiki, these iconic places likely need no introduction. That may happen eventually but for now the primary focus is on their early history: when they were built and when they started getting used for Osho's events.

Osho moved to Pune from Mumbai on Mar 21, 1974. Some preparatory work had been done, stuff moved, living quarters arranged, but there was a whole lot of infrastructure that wasn't in Pune in the beginning and had to be created, including Buddha Hall and Chuang Tzu, sites of so many discourses, darshans and celebrations. Info elsewhere on the net about them is sparse and inconsistent, with some sources putting Buddha Hall's opening in 1975 and some 1977 ...

Even the CD-ROM is not reliable in this aspect of its data in Pune One. It has its very first Pune series, My Way: The Way of the White Clouds, as given in Buddha Hall but May 1974 was way too early for a completed Buddha Hall, just not possible. And it has the next series, a translation of Nahin Ram Bin Thanv, also in Buddha Hall, while Sarlo remembers all the Hindi series he went to, mostly in 1978, in Chuang Tzu. But how reliable are memories?

Fortunately, some published accounts of the time have come to light. The image at bottom right shows the layout of the ashram in 1976. It was published in the 1977 edition of Bhagwan Shree Rajneesh (diaries), a series of gift books put out for use as diaries but with lots of information and pictures about the ashram of the day.

The most detailed verbal report about Buddha Hall to emerge so far is this one below spotted by Neeten, written on Mar 21, 1977 by Rakesh, as a "guest editor" in the Darshan Diary The Zero Experience. Such Darshan Diary "fillers" were not included in the CD-ROM since they are not Osho's words.

"Then there is buddha hall. Conceived to hold five thousand-plus people when finished, it is now a rough foundation of cement with iron rods sticking up in the air everywhere. Nevertheless, bhagwan wants no one to miss this special darshan, so instead of the usual chuang tzu auditorium, he says to prepare buddha hall. People giggle somewhat madly, but laxmi, bhagwan's secretary and personal mountain-mover, says her usual 'It will happen'. Now that's surrender! And, it does happen.
A million indian workmen descend and erect scaffolding - a wooden base for a giant canvas tent. They put canvas on the rough ground too, and mattresses on top of that. All the wood is covered with swirls of coloured material, as are the iron rods. Pathways are built, mountains of rubbish removed, hundreds of lights put up. It all looks like a gigantic spaceship has landed out of nowhere...
Then suddenly it's the twentieth and bhagwan is having the morning discourse in buddha hall. Six a.m. - lecture two hours away and workmen are still at it, putting the final touches to the hall. I am there, one of the security people. It's like a riot squad - to stop over-excited people from mobbing bhagwan. The whole thing seems so unreal as we stand about yawning and drinking tea. Now the people are being slowly ushered in. We are trying to protect a mellow, meditative atmosphere, not so easy as some of us have been up all night and are on the eighteenth cup of tea.
It's almost eight and everyone is seated, waiting expectantly for his arrival. Suddenly his toyota comes barreling out of lao tzu house, laxmi at the wheel, and after making several hair-pin turns, comes to rest. Bhagwan climbs out, palms together greeting everyone, and walks to his chair. There has been a rush of excitement as the car was sighted, but now, no one moves.
Bhagwan begins to speak, to spin his web of music, his dance of words. Everyone, save the one photographer and the video-cameraman, is very still. The next thing I know he's getting up to leave, a huge grin on his face. An hour and a half has passed. Everything went perfectly; of course, how else could it go?
The following morning it is again repeated. For some reason they are still putting final touches on the hall. Two days later it will all be totally taken down and away. The spaceship will disappear."

The question of where Hindi discourses were held is especially tricky, as they certainly were not in Buddha Hall from when it was built, perhaps because attendance was smaller and Osho wanted to keep the more intimate atmosphere of Chuang Tzu for those talks. At any rate, in the wiki for now, we are placing Hindi talks somewhat arbitrarily in Buddha Hall towards the end of Pune One and Chuang Tzu for the early and middle years, with some allowance for high season swings and celebration times. Personal accounts and reliable sources are welcome.

In Pune Two, Buddha Hall underwent a substantial renovation, even getting a new name, Gautam the Buddha Auditorium, and was not in use for much of 1987. The CD-ROM has discourses mostly in Chuang Tzu for that year with a couple of short "tries" in GtBA until back there for good on Dec 22, for discourse three of Om Mani Padme Hum. This all fits with memory, reports and anecdote, so it looks reliable for that period.

One account of the early days before Buddha Hall has it thus:

"I arrived in late July, '74, and I might have been there for at least a few of the 'White Clouds' series or it might recently have ended by then, not sure. Anyway, Buddha Hall certainly didn't exist then, and the early talks were held at some sort of porch area, quite small really; looking back, remarkably intimate. But that wasn't the darshan area, which was behind the main building, to the left, I think. [Radha Hall?] The meditations and camps also took place in the area behind the main building. By the time I left, towards mid-May, '75, Buddha Hall did exist and Osho was a faraway figure...."

"The first discourses in Pune were held on a covered balcony on the second floor directly above Osho's room. We entered by way of Chuang Tzu Auditorium where Osho held Darshan in later years, past by his room, and up the stairs.

"The discourses on the upper balcony were very intimate. There may have been less than 70 people. I remember having space at the back to lay down. Very powerful atmosphere, especially during the Mustard Seed. Many people left crying and needing help to get out. For myself it was the first time I had come to know Jesus despite being raised in a so-called Christian culture.

"The Chuang Tzu Darshan space was the next venue for the discourses as people were now arriving in greater numbers. That would have been by late '74. In the garden behind Krishna house Osho conducted Shaktipat in the mornings. Buddha Hall was completed in 1975 and the new roof constructed in late '77."

Now, "completed in 1975" doesn't exactly fit with Rakesh's description written at the time but otoh Rakesh did not promise a completed structure nor say that nothing had existed there before. He says that much of what he wrote about was taken down again. And Rudra below also has it in 1975. Perhaps these accounts are all sort of compatible.

My memory from arrival in 1978 has it with a quasi-permanent roof with sheets of corrugated metal supported by a vast scaffolding-like structure of poles tied together with rope, and sometimes wrapped (for celebrations?) in festive bunting, as in the second picture. This structure was permanent in that it remained in place for the rest of Pune One but temporary in that it had the look of many such structures in India put up for festivals (only much huger). In fact, its quasi-"temporariness" may relate to the rationale asserted in Pune Three by Resort managers for finally tearing the whole thing down, ie that the old Buddha Hall had never been a legal structure. In this way of seeing, temporariness might have been its only legal basis. -- updated Sarlo 03:50, 2 February 2016 (UTC)

The original Buddha Hall was built in 1975, being a large concrete slab with a tent like structure over it. Over the years, there have been many improvements to the Hall. There was a marble floor laid and a marble podium, then in 1981, when the Commune moved to the United States, the podium was sold.

When Osho returned to Pune in 1986 the Hall was rebuilt again, first as a tent structure, then later in 1987 as a very large, arched tent, said to be the largest in the East. The marble was relaid and a beautiful marble podium built.

A few days later, the marble pagoda behind the podium, the roof and the walls of the old hall were demolished. The marble floor and podium are still being used for various resort activities like dojo and archery. --Rudra (talk) 14:43, 3 February 2015 (UTC)

Besides the Hindi discourses, Chuang Tzu was used for over five years in the evenings for darshans -- more possibly about that later and/or elsewhere -- until shortly before Osho left for the States. It lay fallow for those years and the World Tour but came into its own again in early Pune Two, as mentioned above. Finally, it was spectacularly renovated and turned into his brand new bedroom, only to become in a few short weeks his Samadhi, when his ashes were placed there for people to visit and meditate in their presence. doofus-9 (talk) 05:57, 19 February 2015 (UTC)