From the CD-ROM, some info about the sources for the chapters of this only partly published collection.

Note that the CD-ROM is not consistent in indicating the original language of the talks in this group, ie failing at times to note translations from Hindi.

Ch 1 - Jun 3, 1969, Udaipur, no title
NOTE: This is a partly edited tape transcript of an unpublished early dialogue. It is for reference purposes only.

Editor: date may or may not be in the range for the Mahaveer: Meri Drishti Mein (महावीर : मेरी दृष्टि में) meditation camp, given in Pahalgam, starting Sep 17 but ending, depending on source, somewhere from Sep 29 to Oct 2. A tiny quibble: CD-ROM gives time as pm but archive code (6910010) indicates am.

And likely we have also to fit Early Talks #7 into this camp time too (see below), so two non-Mahaveer discourses during this time.

Ch 3 - Aug 26, 1970, CCI Chambers, Mumbai, no title
NOTE: This is a partly edited tape transcript of an unpublished early dialogue. It is for reference purposes only.

Ch 4 - Sep 22, 1970, CCI Chambers, Mumbai, no title
NOTE: This is a partly edited tape transcript of an unpublished early dialogue. It is for reference purposes only.

Ch 5 - Oct 2, 1970, Manali, no title
NOTE: This is a partly edited tape transcript of an unpublished early dialogue. It is for reference purposes only.

Editor: this is the same time (and place, Manali camp) as another discourse published as Chapter 15 of Krishna Smriti (कृष्ण स्मृति) / Krishna: The Man and His Philosophy. A Q&A omitted from that book? 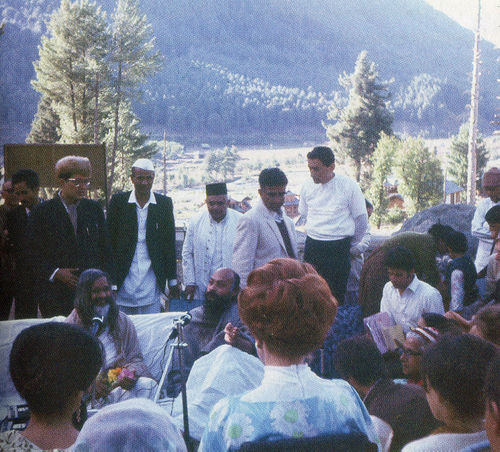 In 1969 followers of the Maharishi Mahesh Yogi invited Osho to talk to them. This was the first occasion on which Osho addressed a western audience, and the first time he talked publicly at length in English.
The discourse has been published in OTI January 1 & 16, 1991; and February 1, 1991.
(Compared to the CD-ROM, the text in OTI is not complete, the part where Maharishi talks with Osho is left out, about 2 pages. )
OTI's introduction to the first article:

In 1969 an extraordinary meeting occurred in Kashmir, when followers of the Maharishi Mahesh Yogi invited Osho to talk to them. Most of these followers were young Westerners who ardently believed that the technique of Transcendental Meditation would lead them to enlightenment.
When Osho told them that no method can lead to either meditation or enlightenment a lively exchange began as many followers of the Maharishi sought to convince Him they were right. The dialogue was recorded, and the first part is published here.

OTI ends the series with:

According to Indian disciples of Osho who were with him at the time, this encounter was the first occasion in which Osho addressed a western audience, and the first time He talked publicly at length in English.

Osho was an entirely different story. In 1969 in Pahalgam, Kahsmir in the Himalayas, Maharishi met with Bhagwan Shree Rajneesh (a.k.a. Osho) to debate merits of their respective systems. Maharishi warned his students Rajneesh was a college professor with a keen mind, so be careful how you respond.
The two gurus sat on a couch on the lawn surrounded by their students. Maharishi described TM as a technique that takes the mind from the surface to subtler levels into the state of transcendental pure consciousness, the absolute, which is everywhere present and the basis of everything.
Rajneesh disagreed. "There is no validity to this whatsoever. How can you have a technique to go somewhere that is everywhere? If it's already everywhere, where is there to go? Why would you need a technique to go there?"
The two gurus got into a heated debate. They denigrated each other's methods, cringed, and made faces at each other. Students got restless and felt the need to defend their respective gurus. Not realizing it was just a game, they became agitated, stood up, and started arguing.
Then the two gurus stood up, hugged each other, and walked off arm in arm.

Editor: Osho was invited to address them, as Maharishi was holding a camp in Pahalgam at that time too. For now assuming that was during the same camp as ch 2 above, so Sep or early Oct. Assuming the literal truth of the statement that this addressing of Maharishi's followers was Osho's first speaking in public in English, then ch 2 above is possibly not English but a translation.

Editor: Original discourse was part of Jyun Tha Tyun Thaharaya (ज्यूं था त्यूं ठहराया), an otherwise not-yet translated Hindi series. Perhaps it qualified as an "early talk" since it concerned Bhuribai, a silent female mystic who had her own entourage and brought them to Osho's first camp at Ranakpur. And a tiny quibble: CD-ROM gives time as "pm" but archive code (8009110) indicates "am". "am" is more likely, seeing the regular discourse regime at that time.

Editor: the CD-ROM gives the date for this chapter as Jun 30, 1969, but this is bogus, since the chapter is a compilation, with its components cited as follows:

So as with ch 8, these are not "true" Early Talks.

Ch 10 - no time or place, title= Man & God -- The Spiritual Dimension of Life
This discourse is published as Part 3, Chapter 1 of "The Mind of Bhagwan Shree Rajneesh".

Editor: This is correct, but the even earlier source is The Mind of Acharya Rajneesh.

Ch 11 - no time or place, title= Man & Man
This discourse is published as Part 3, Chapter 2 of "The Mind of Bhagwan Shree Rajneesh".

Editor: This is not correct, this text has not been found in that book. It is however the text of Flight of the Alone to the Alone (interviews) ch.1. (first three questions before the words "Osho: People 'cling' to discipline..."), which is significantly shorter than in Flight (~3300 words), and unidentified text (a rest of text).

The book was published as Russian translation Rannie besedy. Dikie gusi i voda (Ранние беседы. Дикие гуси и вода). We need to change the category for unpublished original English or leave as long as this book will be published in English? And what category to mention for Russian book? --DhyanAntar 17:05, 17 April 2017 (UTC)

There is no analogous category in German Pubs but that needn't stop you. How about something like ":Category:Translated Unpublished (ru:blah blah)"? The English category should definitely stay the same until it actually gets published in English. -- doofus-9 21:30, 17 April 2017 (UTC)

OK. And thank you for help. I had my doubts with this question. So I create this category and our main editor let tweak if necessary, because the name may be too long:-) --DhyanAntar 04:18, 18 April 2017 (UTC)

Five discrepancies in the time of discourses. Do you suppose the date is more worthtrust than Arch.code, which turned out from the date?--DhyanAntar 15:37, 13 January 2018 (UTC)